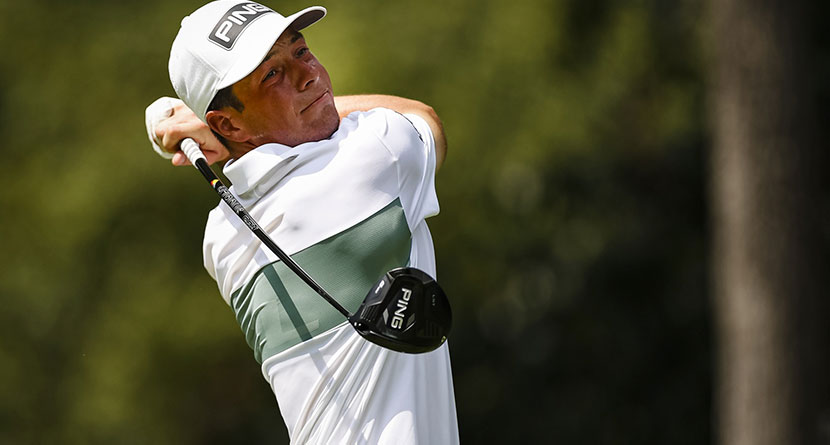 The fall portion of the PGA Tour schedule has a decidedly more relaxed vibe, especially for the top players in the world who don’t necessarily need to make hay before the turn of the calendar since their positions in the pecking order are already predetermined.

For Viktor Hovland, the 24-year-old star from Europe, nothing seems to be overly concerning. The Norwegian’s easy-come, easy-go demeanor is aspirational, but there’s something to be said for playing free-flowing golf when you’re ranked No. 10 in the world and have made $7.7 million on the course alone in just three seasons as a pro.

Already having captured a pair of PGA Tour victories and another one on the European Tour, Hovland showed up at this past week’s World Wide Technology Championship at Mayakoba as the defending champion in good form when a fellow competitor’s Wednesday range session caught his attention.

Danny Lee, a 31-year-old Kiwi, was doing his regular speed training session on the range at Mayakaoba and Hovland’s designated hitting bay happened to be right next to him. Intrigued, Hovland wondered if his driver, which was an inch longer than Lee’s, would deliver more ball speed, so he offered his Ping G-425 to Lee.

Lee let loose with the drive and recoiled quickly, snapping the shaft of the driver into pieces, according to Golf Digest’s Daniel Rapaport who was on the scene.

Hilarity on the range yesterday…

Danny Lee doing speed training. Viktor Hovland is curious if Danny would gain ball speed with his driver, which is an inch longer. Tells Danny to hit one hard. Danny swings out his shoes, recoils…and Viktor’s driver snaps in 3 places 😂😂😂

“He was just doing a speed session behind me and we were just talking,” Hovland explained after an opening-round 67. “He asked me if I could hit some on his (launch monitor) and I hit some drives as hard as I could and then he went back to hitting his.

“I was just curious, I wanted to see if he could get his ball speed up with my driver that was a little longer. Yeah, and then the rest is history. I don’t know where it snapped or how he snapped it, but I just looked up after he hit the shot and it was in pieces.”

Unfortunately for Hovland, the Tour trucks didn’t make their way to Riviera Maya and he didn’t pack a backup shaft. With only hours between his shaft snapping and his first-round tee time, Hovland was able to score a similar driver from James Hahn.

Hahn’s backup was also a Ping G-425 — the same model, same loft and had the same swing weight — although it had a slightly different shaft than Hovland’s gamer.

“You give something pretty close to a guy like Viktor and he’ll figure it out,” Kenton Oates, a Tour rep for Ping, said.

Oates’ prediction proved prescient as Hovland hit every fairway in the first round with the driver, missing only two when throttling back with a different club, en route to a 4-under par start. He would follow up the solid opening round with rounds of 65 and 62 to head into Sunday with the lead.

“I’m hitting it really straight off the tee and was able to set up some really nice birdie looks with some good approaches,” Hovland said. “It’s a little bit shorter, it’s a different shaft, but honestly, it’s almost helped me this week because it’s a little shorter.

“It probably goes 10 yards shorter, but I just felt like I could really hit it a little lower and a little straighter. So I’m hitting that thing really well.”

Hovland cruised to a four-shot victory on Sunday on the strength of another 4-under par 67.

After his trophy ceremony, Hovland said getting something similar to Hahn’s driver would be something he’d consider on an ad hoc basis.

“I think it’s very course-dependent. I’m definitely hitting it a little bit lower and a little shorter, so it’s great for really fast places where you don’t have to cover things,” he said. “I’d say most of the courses we play on the PGA Tour, there’s usually a bunker at 300 or 310 where you really have to send one up in the air and try to cover the bunker. That’s where that driver’s not going to be as ideal as the one that I had before.

“I’ve had my best year off the tee strokes gained with the one that I had before it broke, so I don’t really see a point in changing that driver, but I could see myself using maybe this setup at certain courses, for sure.”