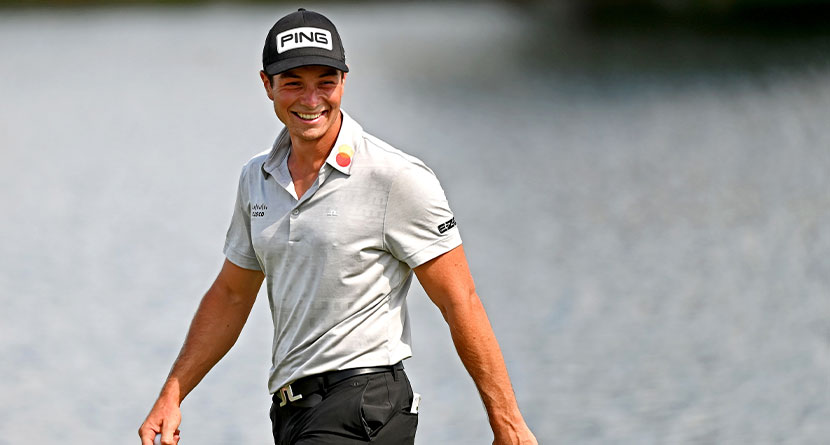 Ripped from the pages of The Pros, They’re Just Like Us comes the ballad of Viktor Hovland, the 24-year-old multimillionaire and seventh-ranked golfer on the planet. Having spent the holidays with his family in his native Norway, Hovland hopped on a flight from Scandinavia to paradise and arrived in Maui last Wednesday by way of layovers in Paris and Seattle… so you can see where this is going.

The only problem when Hovland arrived was that none of his belongings did. No suitcase, no golf bag. With time to spare, and clothes that showed up the next day, Hovland allowed himself a few more days of R&R before things started to get dire. By Monday of tournament week, five days after he had arrived in Hawaii and with no golf clubs to prepare, Hovland put the airline on blast.

“Get your s— together, Delta,” he wrote on an Instagram story.

“It seemed the golf bag was just somehow sitting in Seattle for five straight days,” Hovland said. “I was concerned they lost it initially. And then after a couple of days, they said they physically had it. That got me more frustrated. If you can see the bag, it shouldn’t be that hard to put it on the flight.”

That same day, Hovland’s caddie, Shay Knight, flew in, successfully navigating the airways to arrive with clothes and clubs in tow. Hovland was able to borrow his caddie’s sticks, albeit playing with different shafts and clubheads, to get some practice around the Plantation course before the special delivery showed up Tuesday evening: his golf bag.

It wasn’t all a happy ending either as Hovland opened his soft-sided travel bag to find the head of his Ping driver had been relocated from its shaft. Thankfully, Hovland reported the broken driver was his backup, and the one he typically plays, which came into his possession under further bizarre circumstances, was good to go.

With Hovland’s bag crisis averted, he’ll look to improve upon his 31st-place finish at the Tournament of Champions last year, knowing his plight could have been worse: he could be Keith Mitchell’s fiancé whose bags didn’t make it onto the flight to Hawaii… where they are planning to get married this weekend.

While we can’t offer wedding dress shipping advice, there are a few golf travel tips we can provide: