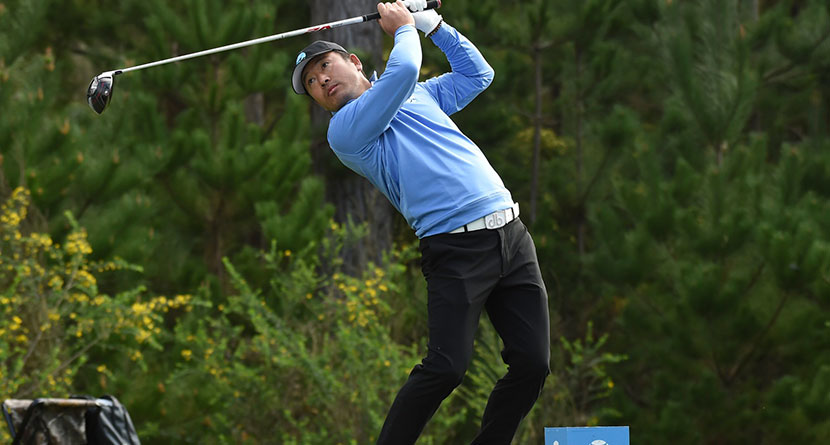 On the weekend where the most interesting man in golf won for the first time with his new bulked-up physique, another of the game’s most popular characters was the protagonist of a blunder unheard of in professional golf.

Playing in the third round of the Korea Professional Golf Tour Busan Gyeongnam Open, Hosung Choi swung and missed the ball with his driver while playing in the final pairing on Saturday.

At 12-under par and playing well, Choi’s unique and viral golf swing went off the rails and he hit about a foot behind the tee causing his driver to bounce up and over the ball with only the pieces of divot and the breeze created by the driver enough to topple the ball to the ground about a foot in front of where it originally was placed.

Incredibly, Choi managed to make a bogey on the hole, dropping him to 11-under par on the week and six shots behind the leader, Joohyung Kim. After rounds of 63-68 in the first two rounds, Choi fired weekend rounds of 74-72 to finish in a tie for 39th place.

Choi gained international interest in the summer of 2018 when his homemade golf swing went viral among golf fans in the United States thanks to Korn Ferry Tour players Tee-k Kelly and Ryan Ruffels who saw Choi’s move during a light-night Korean Tour broadcast.

“If Chi Chi Rodriguez and Gary Player had a golf school, what would their first professional golfer swing like? Voila,” Golf Channel analyst Brandel Chamblee said. “Both those legends had walk-through finishes, but Ho-Sung has taken this move to a new level with a borderline pirouette to keep from hanging back.

“In an era when professional golfers get accused of having golf swings that all look alike, I’ve never seen anyone swing quite like Hosung Choi.”

Ranked 218 in the Official World Golf Rankings, Choi has won four times as a professional.