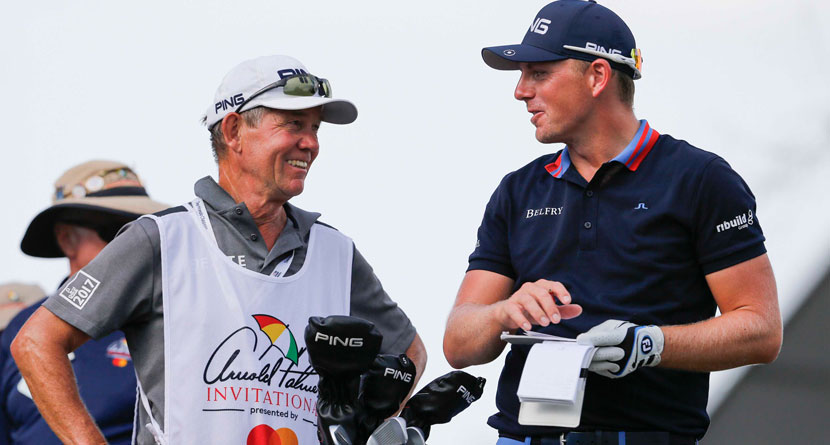 European Tour pro and the No. 24-ranked player in the world Matt Wallace came under intense scrutiny over the weekend as Sky Sports cameras allegedly caught him physically and verbally abusing his caddie, Dave McNeilly.

During the final round of the BMW International Open, Wallace was shown on the United Kingdom broadcast going after McNeilly in an aggressive manner both after hitting his approach shot long on the par-3 12th and again after finding the water off of the 18th tee.

Reached for comment by bunkered.co.uk, the European Tour released a statement that read, “We are aware of the matter and are reviewing it with all parties concerned.”

Re: an alleged incident involving Matt Wallace and his caddie on the 18th hole yesterday.

A European Tour spokesperson has told https://t.co/IShJYM8SUi that the organisation is “aware of the matter” and is “reviewing it with all parties concerned”. pic.twitter.com/LRmsteoEA4

Video of the interactions is scarce with one relatively mundane and innocuous clip of Wallace speaking to McNeilly following his 18th hole tee shot.

I watched him play the 18th and this is the only dialogue with the caddie on my DVR pic.twitter.com/tbPXZReTmS

Wallace’s water ball on the 18th hole would prove costly as the Englishman required birdie on the last to earn a piece of the lead. Instead, he made bogey.

Matt Wallace assaulted his caddy after his tee shot on 18. Please watch the footage. Also, the verbal abuse was disgusting. This guy should be banned from the tour. #BMWInternationalOpen #PGA

At what point do the European tour take a look at Matt Wallace and his on course behaviour. Disgusting treatment of his caddy after he once again kept attitude beat him ..time for a fine or a ban may help him in the long run to be Europe’s number 1 https://t.co/ECgIDyL9xi

I cannot stand Matt Wallace… absolute grade A bellend!! Caddies fault he hooked a drive on 18 into the water!

This isn’t the first time Wallace’s behavior has come into question. Wallace even penned an apology article for The Evening Standard following an outburst at the British Masters.

“The best players in the world don’t do that so why should I,” Wallace wrote. “That’s not who I am and, in that moment, it was just pure passion to win.”

Last week at the U.S. Open, Wallace again came under fire as he threw his putter toward his bag, prompting Sky Sports analyst Rich Beem to comment, “I’m sorry but I just don’t enjoy watching that. I know you’re intense, but get over yourself.”

I agree with @beemerpga – I don’t like to see this either.
If you aspire to become one of the world’s top golfing superstars this is not a good look … #usopengolf #mattwallace pic.twitter.com/aQa7Rq2rkK