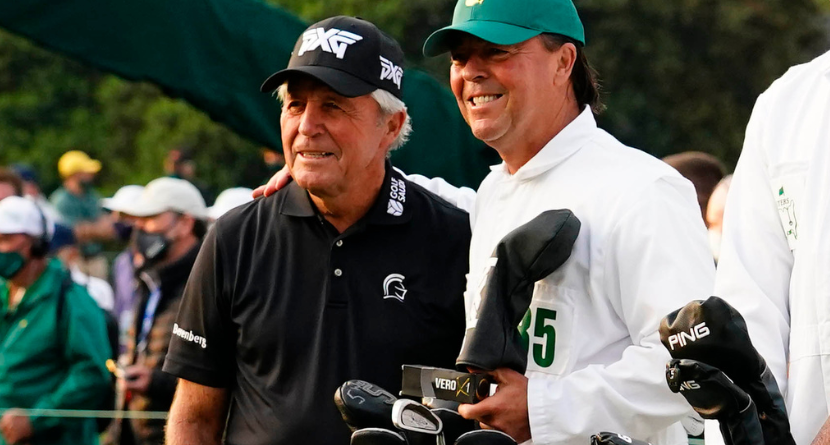 Wayne Player knows he was wrong. Lee Elder was making what would be his first and last appearance as an honorary starter at the Masters, and here was the son of another golf legend decked out in a caddie jumpsuit, seizing the photo opportunity to shamelessly hawk his father’s preferred brand of golf balls.

The third of six children born to Vivienne and Gary Player became an instant pariah on social media. His credential was swiftly revoked by the green jackets. His phone blew up with text messages. And the worst was yet to come.

Now, a full year removed from the incident, Wayne says he’s been banned from ever stepping foot on the grounds at Augusta National again — a punishment issued in the typically understated, almost elegant manner in which the club has always operated.


But does he deserve another chance? In an interview with Golf Digest’s Joel Beall published Sunday, Wayne gave his side, expressing sincere remorse while making the case that a lifetime Magnolia Lane moratorium isn’t proportionate to the misdeed.

“I had probably 50 texts after that, 40 of them said I’m a marketing genius, 10 were like, ‘What the hell were you thinking?’” Player told Beall. “It wasn’t premeditated, but it was a tacky thing.”

Wayne, 58, appeared in 17 PGA Tour events as a pro without so much as making a cut before his career fizzled. He’s taken on a more prominent role in his father’s business interests in the aftermath of an ugly legal dispute that entangled Marc Player, Gary’s eldest son and former manager.

It was Marc who first broke the news of his estranged younger brother’s ban in a reply to a tweet from CBS Sports’ Kyle Porter after the 2021 Masters.

Agreed. Wayne has since correctly been banned from Augusta National and The Masters tournament. What a shame. What an embarrassment. What a bad decision to allow him on the first tee after years of similar shenanigans. My apologies to all.

“I don’t mind letting people know,” Wayne Player said. “To be completely transparent I think it is a cool story because you know, the National never really came out formally and said, ‘Oh, we’re, you know, not allowing Wayne Player to come back to the Masters.’ They never ever said that to the media. That’s just the way they do it. They don’t say much.”

To his, uh, credit, Wayne claims he made peace with Elder, the man who broke the event’s color barrier in 1975, before the pioneering pro passed away in November at the age of 87.

“I understand why people took offense to it,” Player said. “Jack, the Golden Bear himself, told me, ‘What are you thinking?’ I said, ‘You know, Jack, you’re right.’ You have to be accountable when you mess up.”

It should be noted (as Beall does in his story) that Wayne Player already had a Masters rap sheet; in 2019 he was charged with fraud for a bad house rental deal he oversaw at the 2018 event. And Gary, a three-time Masters champ, has courted his share of controversy throughout a decorated career. He raised eyebrows at this year’s Masters when he stepped to the first tee with a well-placed “Golf Saudi” logo on the collar of his quarter-zip sweater — an unmistakable shot against the bow in the ongoing feud between the Tour and Greg Norman’s Saudi-backed startup circuit.