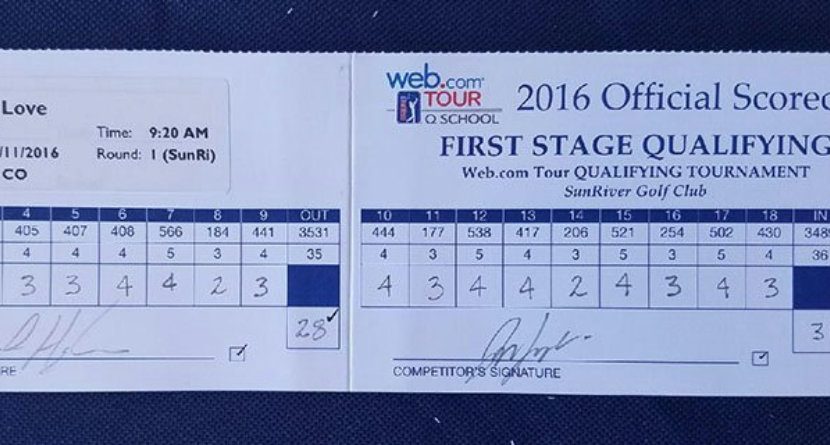 Raise your hand if you have had the chance to shoot a legitimate 59. Don’t worry, neither have I, nor could I possibly dream of doing such things while trying to qualify for the Web.com Tour. Howerver, that’s exactly what James Love did during the first stage of Q-School on Tuesday at the par-71 SunRiver Golf Club in St. George, Utah.

The Calgary native played the back nine first and went out in 31. Coming home was a much more dramatic, as he birdied four of the first five holes and made a critical par on his 15th hole of the day. Needing three birdies on the way in to post golf’s magic number, he rattled off the first two and absolutely knew he had a chance.

“I was definitely confronting the situation,” Love said, according to a report by Kevin Prise of PGATour.com. “I told my caddie on the last fairway, ‘You don’t get many chances, so let’s make birdie.’ There’s not much else you can do … I had a wedge in my hand and a front pin, and I knew I was playing good, so it’s like, ‘Why be nervous?’


“I was basically telling him all the way up the fairway, ‘I’m just going to make birdie.’ So I was definitely going for it.”

Sure enough, he knocked it close and holed the putt, capping off a day to remember.

For context, Love’s 59 bettered the next best score by four that day. After day two, he sits in second place behind John Chin, who fired consecutive rounds of 64. The event concludes Friday where the top 24 and ties will advance to the Second Qualifying Stage.

All in a day’s work for James Love. pic.twitter.com/j4H81iG6Cc

Looks good on you, James!