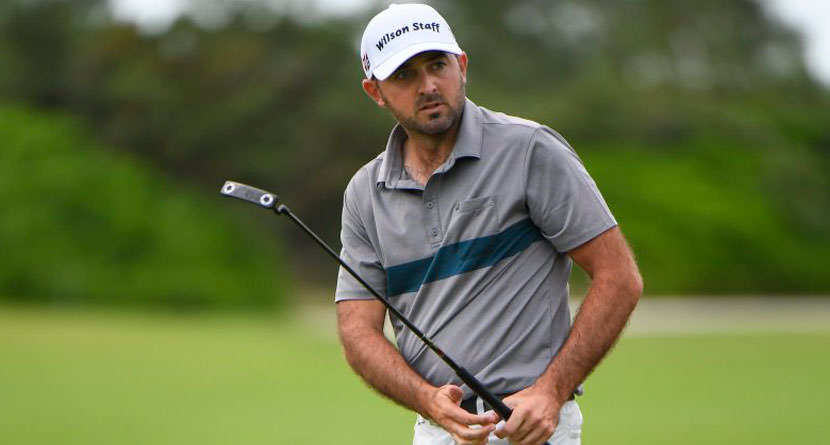 A 72nd-hole penalty assessed to Web.com Tour pro Rhein Gibson as a result of his caddie picking up a ball that was in the hazard cost the pro a tie for second place and what amounted to be $12,000.

Playing in the Bahamas Great Abaco Classic, Gibson needed a birdie on the par-5 18th hole at The Abaco Club to tie eventual winner Adam Svensson and force a playoff. After finding the fairway with his drive, Gibson’s second shot ended up in a hazard and his temporary caddie, Brandon Davis, picked up the ball to prepare for Gibson’s drop.

Unfortunately my caddy was involved with a ruling on the 18th that caused me to fall from t2 to 3rd. My actions were less then professional and I apologize to my caddy and those that took offense to my behaviors.

Rhein Gibson a little heated on final hole of Web event. Trailed by 1, hooked shot into hazard. Caddie picked up ball in hazard before Gibson got to it. Subsequent 1-shot penalty difference between T-2 and solo 3rd. https://t.co/09AiDaLsEQ

The result was a penalty under Rule 18-2, which led to Gibson ripping the headcover off of his putter and throwing it at Davis in disgust.

While it seems like an unfortunate turn of events, Davis stands by his actions and points to Decision 26 1.9 as his shield.

I was his caddy and did nothing wrong, here’s the proof:

A.There is no penalty under Rule 18-2 if there was no doubt or it was reasonable to assume from the player’s actions or statements that he would make his next stroke from outside the water hazard. https://t.co/W8dQHmAkeK

Here’s exactly what happened…Ball was dead underneath two rocks and I told you about it and you said “fuck” and turned around stopped looking and walked back to the bag. The tour official actually found the unhittable ball. I then went over and quickly retrieved it.

Yes, the ball was unplayable. He walked over and saw it and walked off, the official was right there, we’d already determined where it crossed. So I picked it up and the official called a penalty which was an incorrect ruling. Penalty bumped him from T-2 to 3rd solo.

The ruling, which Davis states was incorrect, cost Gibson the difference between a tie for second place and solo third-place finish, which according to the official Web.com Tour Tie Table for the event works out to $12,000.

Davis also stated on Twitter that his employment with Gibson came to an end with the putter cover throw and that he will no longer be working for him.

Gibson’s (ex-) caddie says their partnership ended abruptly today after 72nd hole drama. Also raises question of whether Decision 26-1/9 should have absolved penalty that was applied under Rule 18-2. https://t.co/SYSDfVMiBV

As of the time of this posting, the Web.com Tour has not commented on Davis’ claim that the rules official was incorrect in his assessing of the penalty. Later in the evening, Davis posted an 8-minute video explaining his side of the situation.

Gibson currently sits in third place on the Web.com Tour’s money list, The 25, which determines who will receive their PGA Tour card at the end of the season.