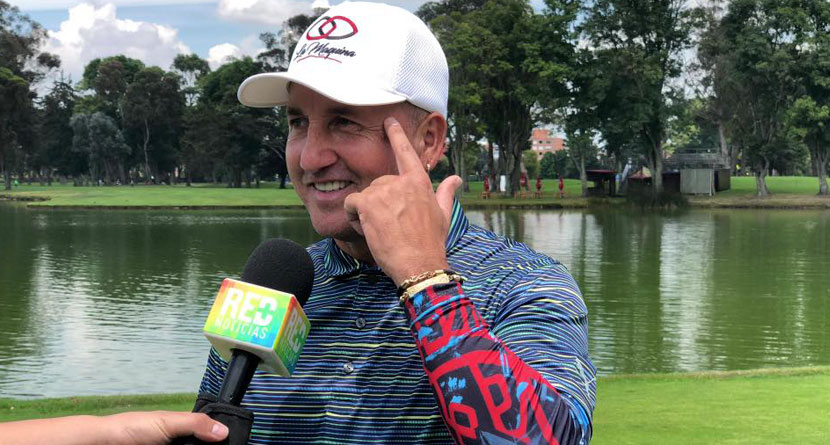 The topic of sponsor’s exemptions has become a hot topic in the past few months with the likes of Stephen Curry and Tony Romo receiving them to play at the highest levels of the game. However, the debacle going on at this week’s Web.com Tour event, the Club Colombia Championship, will undoubtedly stoke that flame.

The tournament organizers of the event extended one of its few invites to 52-year-old amateur Julio Bell, which seems curious on the surface, but after seeing Bell’s results this week, it becomes even more suspicious.

GolfDigest.com’s Joel Beall had more on the bizarre story.

Julio “The Machine” Bell, a 52-year-old amateur, turned in a first-round 93 at the Country Club of Bogota. Bell made just one par on the afternoon, and was 26 shots behind Thursday leader Sam Burns.

Bell is a former boxer who took up golf just five years ago, and currently trains out of the Joey D Golf Sports Training Center in Jupiter. According to a local newspaper, Bell is able to chase his golf dream thanks to investments and his Columbian business he shares with his wife.

However, Bell’s score has generated its share of controversy among players and caddies at this week’s event.

“I will tell you a lot of players are not happy about it,” a caddie told Golf Digest. “Just some local that’s taking a spot from guys who are trying to make a living.” That this is the event right before the first reshuffle hasn’t helped matters.

“It’s (nonsense),” relayed another caddie. “Ken (Looper, a Web.com Tour pro and first alternate) is sitting out because someone paid money to play.”

Before his second round, Bell, sensing the criticism, posted a message on Instagram.

Bell went on to shoot a second-round 105, finishing his round, but not signing his scorecard, which resulted in a disqualification. His two-round total of 198 left him 56 shots off of the cutline and 65 shots off the lead.

Here is a picture of Julio Bell’s scorecards from 2 rounds at the Club Colombia Championship on the @WebDotComTour … So when can I get a shot? pic.twitter.com/yxMDBcW4Pw

The obvious question that continues to come up is how sponsors should use their exemptions. There’s an undeniable upside from a marketing perspective of bringing in a big-name celebrity like Curry or Romo, but for those trying to make a living on the Web.com Tour, the publicity is the last thing on their minds.

It’s a catch-22, but if Bell is going to take a spot in the field and subject his playing partners to 36 holes of terrible golf, the least he could do is sign his scorecard and post the score.