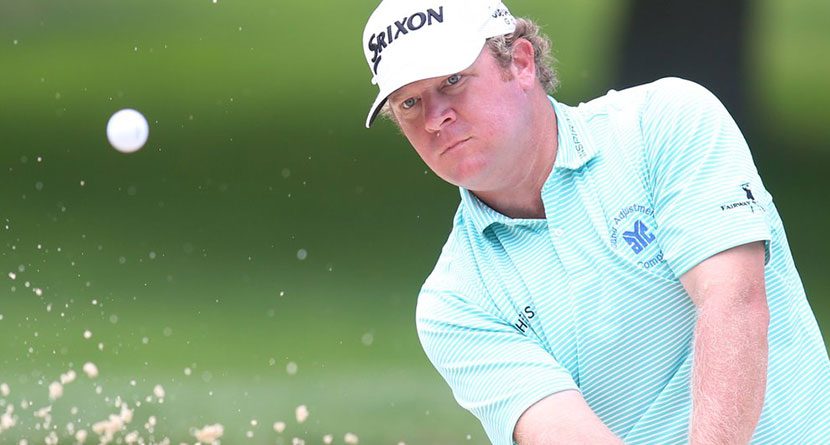 Professional golfers at the highest level are independent contractors, meaning that they get to set their schedule, and play when and where they want, as often as they want. Unless they’re not allowed.

2016 Memorial Tournament champion William McGirt enjoyed a solid campaign last season, which saw his Official World Ranking rise from 170 to his current spot at 42nd in the world. Normally, that would be a good sign. The top-50 in the world rankings receive even more perks and invites than some of the other top players in the world — majors, invitationals, World Golf Championships.

It’s that last bit — the WGCs — that’s tripping McGirt up this week. Before ascending into the rankings elite, McGirt frequented opposite-field events that take place concurrently as the limited-field, guaranteed-payday World Golf Championships, and as such, he feels a connection to the events.

Totally agree!!! On my way. Hoping to shake hands with both @WilliamMcGirt and Mr. Sanderson!! My kind of stand Willy:) Play in pro-am!! https://t.co/FJgDYZbyei

However, given his new stature in the game, he can no longer play in those events because of a quirky and little-known PGA Tour rule that states a player who is exempt into a WGC is not eligible to tee it up in the opposite-field event, which this week is the Sanderson Farms Open.

McGirt plans to attend the event anyway, according to a report from Mississippi Today.

Get this: Even though he is not allowed, by PGA Tour rules, to play in the Sanderson Farms Championship at Country Club of Jackson, McGirt wants to come and support the tournament. He plans to fly to Jackson Tuesday night for the pro-am pairings party, play in Wednesday’s pro-am and then fly back home to South Carolina.

“It’s about two things,” McGirt said Tuesday night by phone. “One, I have no interest in flying halfway around the world to China to play in a golf tournament. Two, I want to support a tournament I love and a cause I believe in. So that’s what I am going to do.”

First, he had to clear it with the PGA Tour, which he did. The tour’s rules strictly forbid a golfer skipping a WGC event to play in another tour event. But there’s nothing in the rules about playing in the pro-am. So McGirt will take what he can get.

And so will the Sanderson Farms Championship.

“I was blown away when I heard about what Will wanted to do,” said Steve Jent, the Sanderson Farms Championship’s executive director. “To have that kind of support from a player is just phenomenal. It means a lot to us. Will is such a solid, solid individual. He’s gonna do what he believes in.”

The rule is in place as a measure to give lower-ranked and status players an opportunity to tee it up more often than on a typical tournament week with the thinking being that 50-100 of the players who would ideally be in the field at these opposite field events are playing for guaranteed cash elsewhere. While it is by no means a perfect system, it’s cool to see a top player support a lower-level event instead of chasing the almighty dollar.