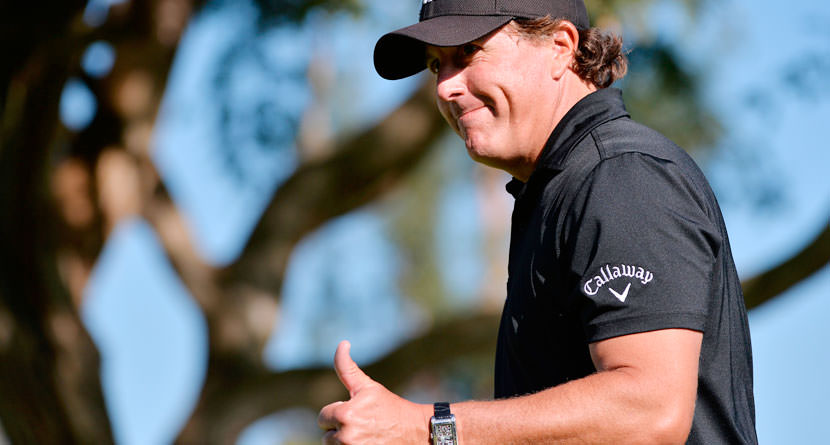 Phil Mickelson infamously — and somewhat nefariously — has always had a penchant for wagering a few bucks. During his nearly three decades on the professional circuit, stories of Phil’s famous Tuesday money games and other wagers have become the stuff of legend.

There’s a whole litany of them: winning some cash on the set of Tin Cup, charging Nick Watney in British pounds for an Open Championship wager, a controversial bet with a then-amateur Ryan Ruffels, a run-of-the-mill Tuesday money game against Paul Azinger and Payne Stewart or his personal favorite against Brendan Steele and Keegan Bradley at The Players Championship.

‘Wagering is encouraged.’ My favorite Phil Mickelson betting story — and why it’s relevant this week. https://t.co/truL0Azlhn

We can now add the 2013 Wells Fargo bait and switch to the list, thanks to The Action Network’s Jason Sobel. The former ESPN and GolfChannel.com writer recalled his favorite Mickelson gambling story in a Wednesday column that took place five years ago this week at the Wells Fargo Championship.

Buddying up to Mickelson during the closing stretch of his Wednesday pr0-am in 2013, Sobel and two other colleagues were offered an invitation to a get-together Mickelson was hosting at a restaurant on Saturday night of tournament week. With both the NBA and NHL playoffs in full swing as well as a Floyd Mayweather fight taking place, Mickelson hosted a group of 50-60 at a local Wolfgang Puck restaurant.

As Sobel tells it, Mickelson was a gracious host to media members, PGA Tour players, caddies and staffers. Mickelson addressed the room, thanking the wait staff and everyone for coming. He closed his comments with a smile, saying “Oh, and one more thing: wagering is encouraged.”

When the undercard of the Mayweather fight began, Mickelson again addressed the room, touting the favorite and explaining that the underdog is not only much less experienced but also fighting up a weight class.

But Phil had a feeling.

“You know,” Mickelson said, “I’m sort of liking this young kid. If anyone wants the favorite, I’ll take that bet at even money.”

Of course, the partygoers bit on Mickelson’s bait. By the end of the first round, Sobel and everyone else who had taken Mickelson’s bet knew they’d been had. Midway through the 5th round, the underdog TKO’d the favorite and Mickelson made the rounds to collect his winnings.

Sobel estimated that Mickelson probably made enough money on that one wager to cover all the expenses incurred on the night and then some. More likely than not, Sobel said, Mickelson tipped out the wait staff and came out even on the night, which after hosting 50-60 people doesn’t seem like a bad result.

The moral of the story: when Phil Mickelson makes a wager with a sly smile, proceed with caution.