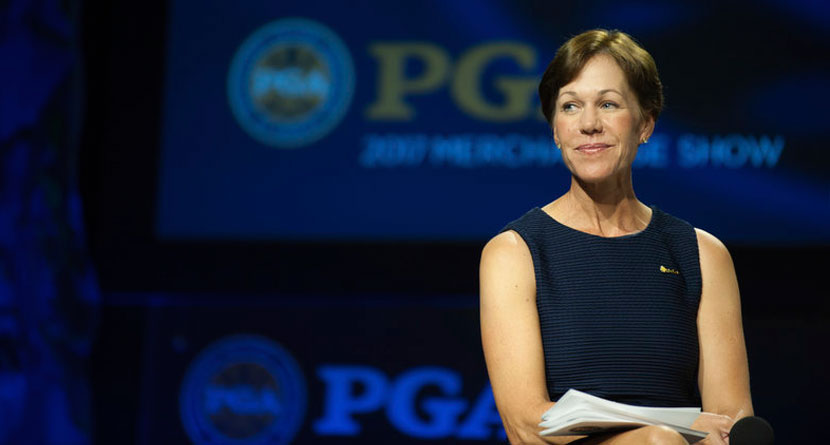 The PGA of America’s focus on diversity and inclusion is evident in their strategic efforts to add programs catered to introducing women, minorities and veterans to the game of golf. Suzy Whaley, the first female president of the PGA of America, was a key influencer in the forward progress of the diversity strategy.

“When we grow the game to look more like our communities, we will all benefit,” Whaley said. “At the PGA of America, we are taking intentional steps to grow the game amongst all.

“Examples of this include our just recently contested PGA Works Collegiate Championship. This is the most culturally significant championship in the game with 72% of those participating being non-Caucasian, and we host a job fair as well to share all the industry has to offer these talented young men and women.”

“The @pga of America is here at the PGA WORKS Collegiate Championship to find talent to diversify the golf industry workforce, and we invite you to have a #CareerInGolf” – PGA of America President Suzy Whaley (@suzywhaley) pic.twitter.com/U6yxzMtri9

In addition to initiatives that make the game more culturally diverse, the PGA of America is implementing programs that give competitive opportunities to military Veterans.

“We recently held the Secretary’s Cup on May 13 at Bethpage State Park Red and Blue Composite Course,” Whaley continued. “The Secretary’s Cup is a 9-hole scramble match amongst PGA HOPE Chapters in the Met Section (six teams), as well as one team apiece from the Gateway, Carolinas, Met, New Jersey, Northern California, Philadelphia and Western New York Sections.

“While it is a competition where a winning team will be crowned, the main purpose of the event is to celebrate the PGA HOPE program, which uses golf as a rehabilitation tool for military veterans. The goal is to provide a once-in-a-lifetime event for these 48 veterans and the PGA Professionals who are working to change veterans’ lives.”

Veterans Find a Form of Therapy in PGA Hope Program https://t.co/GAPdp5ESm5 via @MSNNews

Another event that took place at the 2019 PGA Championship venue was the Beyond the Green Initiative.

“Beyond the Green is a career development event designed to inspire students about careers in the business of golf through personal interactions with PGA Golf Professionals and corporate business executives,” Whaley said. “The students —approximately 50 high school seniors and college students from several Sports Management Programs in the northeastern United States with a primary focus on schools with golf teams — viewed the course before and during the PGA Championship.

“The PGA of America’s intent is to identify the best and brightest young men and women who are ready to take their academic excellence and sports acumen to the next level.”

The PGA of America has shown commitment to youth development in more ways than the Beyond the Green Initiative. Since 1998, the PGA has provided more than $12 million in funding for over 700 youth programs in the U.S., including $980,000 in scholarships for minority and female students.

Whaley feels optimistic about the future of golf when looking at the statistics of growth within the industry.

“We are also excited to know that a record-tying 2.6 million people played golf for the first time in 2018 – a number that has increased over the past five years,” she said. “Among beginners, diversity is growing, as 31% are female, compared to 23% of the overall golf population. In addition, 26% of newcomers are non-Caucasian, up from 6% in 1998.

“We understand we have work to do. The good news is that the golf industry is working together closer than ever on this issue, and we all have a stake in ensuring the health of the game.”

One of the programs the PGA relies on to get youth involved in the game is the PGA Jr. League. Growing impressively with more than 50,000 boys and girls playing in 2018 (up nearly 20% YOY),  81% of participants were beginners or recreational golfers, demonstrating the developmental nature of the program and its inclusivity to youth of all skill levels.

With PGA Jr. League, someone’s always got your back.#gamechanger pic.twitter.com/UM9RcH5qUC