What The Best Lag Putters On Tour Have In Common 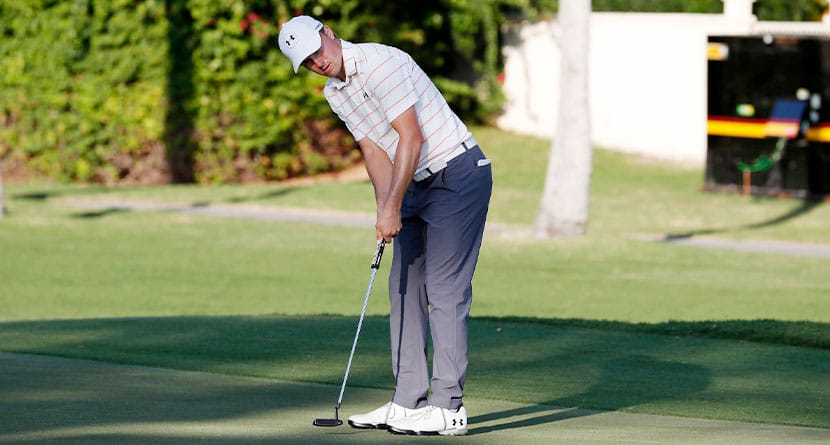 My ears perked up when I heard Frank Nobilo make a comment about distance control during a telecast earlier this year — during the WGC-FedEx St. Jude Invitational. One of the leaders had just left a longish lag putt close to – but short of – the hole.

Frank said something like, “The best putters more often than not leave their lag putts short and avoid running the ball 7 feet past the hole.”

Frank is a terrific analyst, and I am confident that this was simply an attempt to compliment the player. Nonetheless, I tweeted that it is not true and promised to follow up on my statement.

I have studied the #1 Strokes Gained putter each year since Strokes Gained was implemented and they actually get a greater percent to or past the hole from 20 feet and greater. Article on distance control to follow! #pgatour #WGCFedEx #strokesgained

In early 2016, GOLF Magazine asked me if I had any unique insight on Jordan Spieth’s phenomenal 2015 season. Spieth’s 2015 highlight reel included five wins including two majors (Masters, US Open), as well as finishing 4th in The Open and 2nd in the PGA Championship.

And yes, in fact, I did have insight into Spieth’s secret sauce!

For that magical year, Spieth was ranked #7 in Strokes Gained Putting (.571) behind #1 Aaron Baddeley (.722). But I had recently studied Jordan’s outstanding distance control in relation to Baddeley and the four previous #1 Strokes Gained putters: Graeme McDowell (2014), Greg Chalmers (2013), Brandt Snedeker (2012) and Luke Donald (2011).

I found that Jordan’s putting and especially his distance control (putts from 20 feet and greater) was better than all of them. I contend that if his performances in the majors had been included in the ShotLink data, he would have ranked #1 in Strokes Gained Putting.

I break down distance control into four different skills. In the exhibits below, Jordan is represented by a YELLOW arrow, the five #1 Strokes Gained are in RED and the 2015 PGA Tour average in BLUE.

There is less than a foot difference in the average start distances, but Jordan is the only player to achieve an average leave for the entire season under two feet.

Bear in mind that this is all putts starting at 20 feet or greater, which on tour is 38% of first putts. Jordan’s 1-putt success from this distance was almost twice that of the tour average, 26% more than the #1’s and with an impressive lack of 3-putts.

Putts Holed or Left Beyond the Hole – Never Up, Never In!

Clearly, even the average Tour player gets the majority of lag putts to the hole. I submit that this highlights Jordan’s distance control skill and why his long-range 1-putt vs. 3-putt numbers are so good.