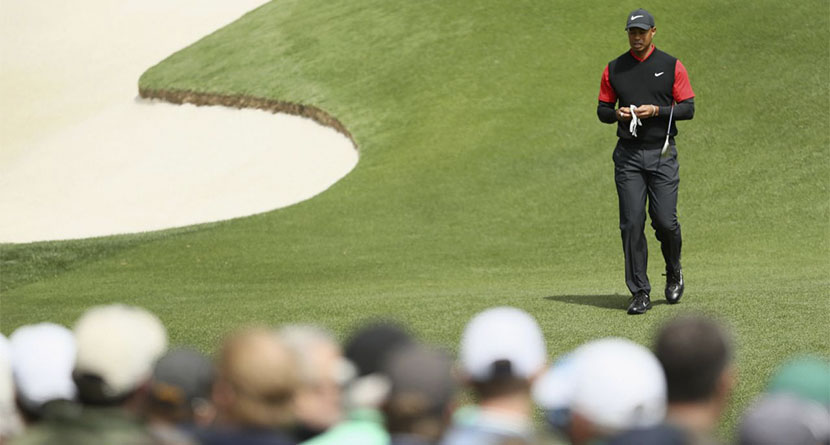 The Tiger Woods hype was back with a vengeance this past week at Augusta National.

The sponsors, the media crush and the ratings have all returned to the PGA Tour. Tiger is back, and everything is perfect in the golf world. Nike even had a welcome back commercial that aired last week. He was the only Nike golfer to wear red on Sunday. The stage was set for a storybook run for the green jacket.

That is until Woods got on the course.


Woods’ foray back into a major had little drama other than that he is a player once again in competition. After 72 holes at Augusta National, the four-time winner of the Masters bogeyed the 72nd hole to finish the tournament at 1-over par. He was never a factor in the golf tournament that was won by Patrick Reed on Sunday and finished his round well before the top players aimed for a Masters title.

Woods in contention was the only thing missing this week, but he provided a glimmer of hope on Sunday with a 3-under par 69 to finish the tournament. Woods wasn’t entirely happy with his round on Sunday – he missed five putts inside of 6 feet – and never put together a sustained run all week.

Perhaps the best moment for Woods was on the 72nd hole with the gallery on 18 giving him a hero’s welcome.

“This is one of the greatest walks in all of golf,” Woods said. “And I had missed it for the last couple of years. I hadn’t been able to play in it, so now I’m glad I’m competing in this tournament. And to face the challenges out there, I missed it. I really did. I missed playing out here. I missed competing against these guys. Such a great event. Best (event) in all of our sport.”

Watch @TigerWoods‘ final round in under three minutes. #themasters pic.twitter.com/590y4DqFaF

So where does Woods go from here?

Woods was non-committal after his round on Sunday and said he needs to take a break and assess where his game is. Woods’ only commitment on the schedule this summer is The National in the Washington D.C. area, which benefits his TGR Foundation. Outside of that, where Woods plays to prep for the U.S. Open at Shinnecock Hills is a mystery, although smart money is on a return to the Wells Fargo Championship before next month’s Players Championship.

He also has a lot of work to do on his game if he is going to contend with the top golfers in the world at the U.S. Open. Woods lamented the play of his irons over the first three days, then watched as his putter abandoned him on Sunday.

Woods three-putted from six feet on No. 7, and despite hitting 15-of-18 greens in regulation, had 32 putts in the final round — including a miss from 7 feet on 18 that could have resulted in an even par score. The driver was good for Woods on Sunday as he played the par-5s in 5-under par. He also had a terrific eagle at No. 15 that had the crowd roaring.

Woods typically takes a break after the Masters and likely will not play for a few week and “get away for awhile.” Woods played a busy schedule and said that he wanted to give his body a rest.

“The run-up to this event is pretty hard and pretty grueling,” said Woods. “I pushed myself pretty hard to get ready. And I peaked at it four times over the course of my career, and it’s tiring.”

Woods on the comeback trail will remain one of golf’s big stories. The only thing left for Woods to do is to put himself back in the winner’s circle.