Wie Shoots 84, Not Sure How Much Longer She’ll Play 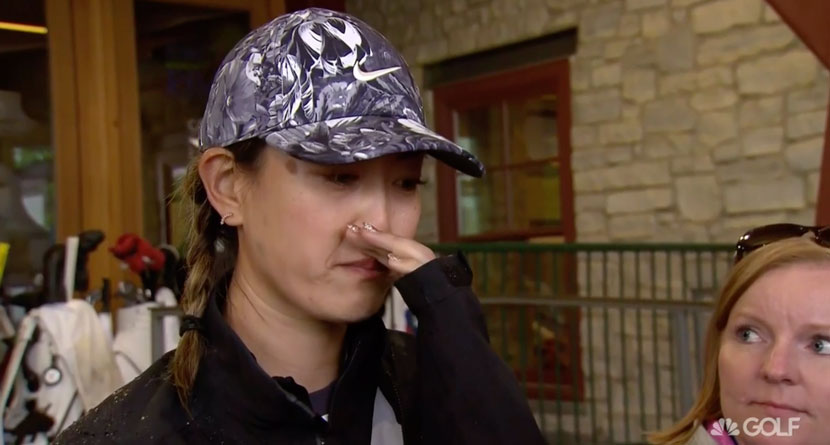 Making her first start back on the LPGA Tour since announcing another indefinite leave to heal from her injury flare-up, Wie shot a 12-over par 84 to be the lowest-ranking Tour professional on the leaderboard after round one.

When she met with the press afterward, however, Wie said she was happy to be out there regardless of her score and the fact that she was icing her wrist throughout the round.

“It was kind of a little foolish to think that I would shoot really well, just hitting golf balls last week,” Wie said. “It’s a tough golf course, but I’m really, really happy that I played. Just feeling a lot of joy, just being out there, and, you know, competing again. It’s going to take time, and I’ve just got to be patient, and, thankfully, I have all afternoon to get warm again and take care of my wrist.

“It’s hard,” she said. “It’s just one of those situations where I’m not, you know, I’m not entirely sure how much more I have left in me, so even on the bad days, I’m just, like, trying to take time to enjoy it. But it’s tough.” She returned to the LPGA Tour four months after her surgery, but in her second event back — a title defense of the HSBC Women’s World Championship — she was forced to withdraw due to lingering pain in her surgically repaired hand.

Wie returned to the course a few weeks later, but after a missed cut at the first major championship of the year as well as another setback at April’s LOTTE Championship, she decided to take some time off.

She tees off in the second round of the KPMG Women’s PGA on Friday at 3:44 p.m. EST alongside Lydia Ko and Minjee Lee.