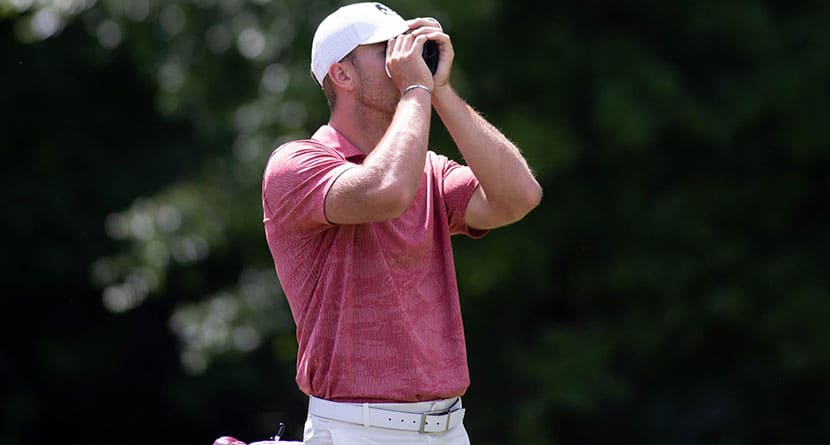 Despite what a lot of fans think, professional golf isn’t all courtesy cars and private jets.

The vast majority of golf’s upper echelon is made up of carpet-bagging mini-tour pros hoping to scrounge up enough money and status to climb the ladder towards the PGA Tour, which means every week is important, and none more so than those when a player’s game is in form with a solid payout on the line.

Brett White, a Houston-based mini-tour player, was in line to make a good check at the Colbert Charity Classic on the All Pro Tour. The former Eastern Michigan stalwart has had his share of adversity in life, including fighting back from a life-threatening brain infection in 2017, so he’s more than equipped to handle the brutal conclusion of Sunday’s event.

White entered the final round at Colbert Hills in Manhattan, Kan., four shots back, but in the final grouping with Hayden Wood, the 54-hole leader, and Zach Bachou, who was two strokes back. A paycheck of $23,000 was set for the winner.

White’s playing partners noticed something was off with his rangefinder on the third hole: the slope function was turned on, which is illegal in tournament play.

flipped it on. And had used it twice…resulting in a DQ.

With 23K to the winner, White was pretty devasted understandably.

White confirmed the report shortly thereafter, saying he had not noticed the slope function was flipped on, meaning he had used it for multiple shots, which results in disqualification under Rule 4.3.

On the 3rd tee box during round 4 my playing partners noticed my rangefinder clicked on slope mode. I did not notice it was on until after my fourth shot. While it was a complete accident, intent in this situation does not matter and I was DQ’d. Tough pill to swallow.

“Due to multiple accidental breaches of Rule 4.3a(1), measuring elevation changes from a distance measuring device, Brett White was disqualified from the Colbert Charity Classic during play of the final round,” the All Pro Tour tweeted on Sunday.

Due to multiple accidental breaches of Rule 4.3a(1), measuring elevation changes from a distance measuring device, Brett White was disqualified from the Colbert Charity Classic during play of the final round.

White’s playing partner Wood would go on to win the event and the $23k while Kyle Gaines finished second, earning $9,700, and Matt Cole and Austin Jordan tied for third and earned $5,625 each.