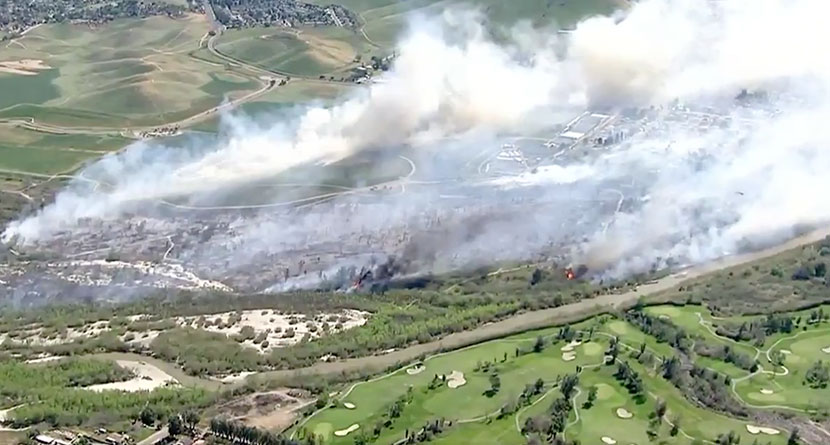 A wildfire sparked less than a mile south of Goose Creek Golf Club where the 48-player qualifier for the PGA Tour Champions Hoag Classic was being held on Tuesday resulting in the course being evacuated and nine-hole scores being counted to determine the four remaining spots in the field.

The Riverside County Fire Department reported a fire, which is being called the Mann Fire, near the Santa Ana River in Norco shortly before 11 a.m. PST. The qualifier, which began earlier that morning only saw seven players complete their 18-hole rounds.

By the time the blaze had picked up, all players had finished at least nine holes, and after originally calling for a delay, officials decided to award the qualifying spots to two players from each side of the course based on their nine-holes scores, according to GolfChannel.com.

I thought I’d seen it all on the golf course ⁦@BretBaier⁩ Evacuating the ⁦@PGATOUR⁩ qualifier pic.twitter.com/uosFGL8ABc

Been through plenty of rain delays over the years but NEVER a fire delay. That Chopper pilot has skills!! #CalFire @ChampionsTour @HoagClassic Qualifier pic.twitter.com/9ZVDQjCKJO

As reported by Monday Q Info, and corroborated and clarified by Micheel, due to the evacuation order, players had to submit their scores via text message.

Just to be clear, the County Sheriff and Fire Marshal ordered everyone to leave the property. A picture of the scorecard was sent via text or email as you state. We were responsible for submitting our fellow competitors score. In my case, I sent in Rick Garboski’s card.

As of late Tuesday night, 175 acres had been burned by the Mann Fire and the blaze was only 20% contained, according to CAL FIRE.