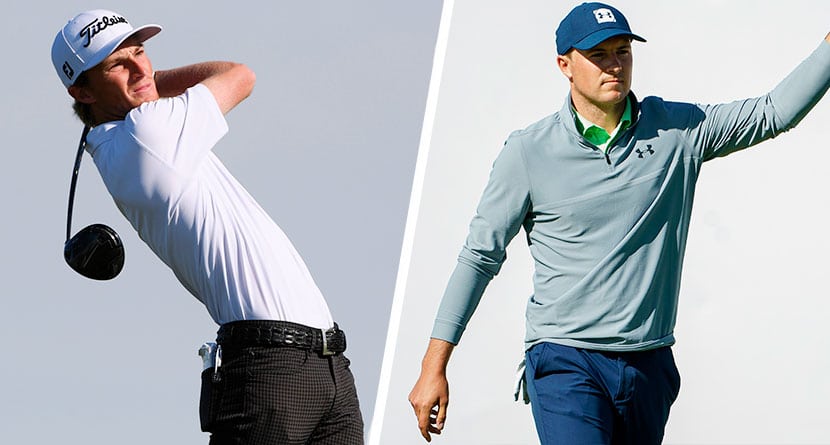 Thanks to countless PGA Tour broadcasts, most golf fans are aware that Jordan Spieth and Justin Thomas have been friends going back to their junior golf days, but when Spieth would head back home to Texas, a few more future Tour stars got to witness the prodigy in action.

Will Zalatoris and Scottie Scheffler, fellow Texans who have made their way to the Tour and inside the World top-50, have been gaining notoriety and are now able to shine a light on their first interactions with the players they ran into coming up the ranks, most notably Spieth.

On Tuesday this week at the AT&T Pebble Beach Pro-Am, Zalatoris entered the virtual press room to take some questions from the media and was asked about his rise through the Texas junior golf scene, and specifically about running into Spieth and/or Scheffler.

“I get asked a lot, ‘What’s it like playing with Jordan?'” Zalatoris said. “I said, ‘Well, just expect a couple ridiculous 30- or 40-footers and maybe a chip in per round’ and that’s kind of what you’re going to expect.”

Asked for a specific story that stood out in his memory, Zalatoris went back some 13 years to when he and Spieth were 11 and 14 years old, respectively.

Before @WillZalatoris could even drive a golf cart, he was playing golf with 14-year-old @JordanSpieth.

He couldn’t believe how good Spieth was at that age. pic.twitter.com/E96GStC0z8

“Jordan, specifically, was always kind of the, anytime he played it was kind of like, ‘All right, here we go, what’s he going to win by,'” Zalatoris said. “Jordan was 14 — we weren’t even old enough to drive carts yet — and I remember playing at my home course at Bent Tree and he flared one way out right off the tee (on the first hole), hits his second shot in the bunker, makes like a 30-footer for par and then he birdies 2, 3, 4, 7, 8, 9 to shoot 29 on the front and shot 63 and shot the course record that had been there for 15 years.

“That’s stuff like that when I think I was probably 11. I’m thinking, ‘good night!’ I mean, I couldn’t even fathom shooting a score like that at 14.”

For Spieth’s part, he took part in the mutual admiration society when he entered the press room on Wednesday.

“He’s always been a phenomenal striker of the golf ball,” Spieth said. “I remember playing some junior golf tournaments that he was in, but I have clearer memories of (high school). I think we both tied and had playoffs in high school a couple of times when I was a junior or senior and he was a freshman. So after playing some junior golf with him, then you’re the senior and he’s the freshman and we’re in a playoff and it’s just it’s almost like, ‘wow, all right, yeah, you’re next level, you’re going to carry this on.’

“We have been playing quite a bit of golf in Dallas together, actually, throughout the weeks. We play a lot with Tony Romo and we get other pros in the area and have some really good games. So it’s been nothing surprising over the last couple of years after watching him week-in and week-out at home. His game was clearly good enough to carry on to any level of golf. So I’m excited to see him doing so well and I think this is just the start for him.”