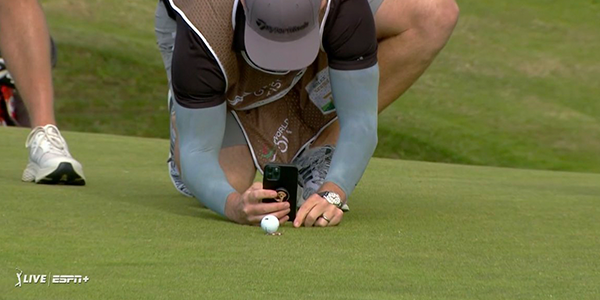 When a PGA Tour pro hits a pitch so precise that it kisses the cup and keeps rolling, as Will Zalatoris did at the Scottish Open Thursday, it’s hardly a cause for further examination. But to comprehend what happened next might require a second viewing (or 20).

Zalatoris’ fourth shot on the par-5 16th hole caught a piece of the cup and rolled to a stop about five feet away — directly on top of the poker chip ball marker belonging to Matt Fitzpatrick, the man who bested him in a playoff at the U.S. Open.

Check out the mesmerizing footage below, along with the mostly oblivious commentary that accompanied the shot.

The camera operator was, thankfully, way ahead of the announcers. Frank Nobilo and his PGA Tour Live broadcast partners were too caught up in their chit-chat to notice where Zalatoris’ ball had settled, but some precise zooming quickly clued them in.

You know it’s rare when a caddie busts out the phone to take a picture pic.twitter.com/C02TNE7jIg

The sight was so odd, Collin Morikawa’s caddie knelt down to snap a picture for posterity. Unfortunately for Willy Z, his round otherwise lacked excitement. The 25-year-old submitted a 1-over 71 to finish 10 shots behind Cameron Tringale, who set a scorching early pace with a 61.