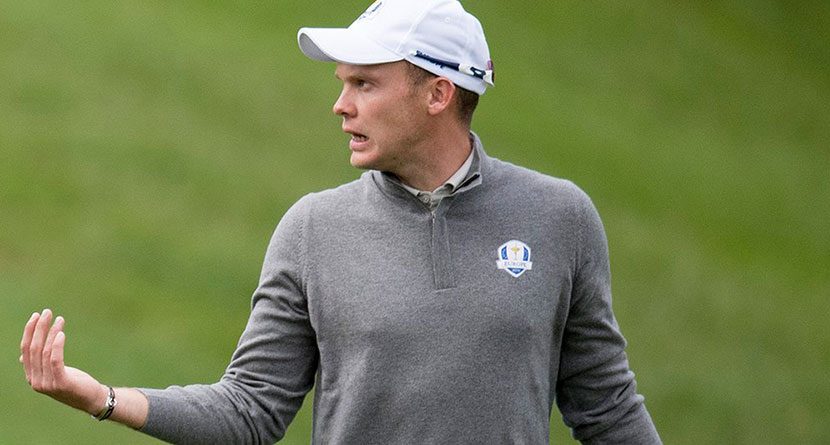 The Ryder Cup drama just keeps topping itself, but on Wednesday, the day’s first drama came from an unlikely source: Danny Willett’s brother Pete. Willett’s brother is no stranger to controversey, most notably making headlines for live-tweeting his brother’s Masters victory and taking some shots at Jordan Spieth.

Sorry to any American followers… but I mean every word. COME ON #TeamEurope @NCGmagazine https://t.co/cPIUW0pFEy

On Wednesday, however, Pete Willett didn’t limit his barbs to one player. Instead, he went after the entire American Ryder Cup fan base in a post for the National Club Golfer.

Team USA have only won five of the last 16 Ryder Cups. Four of those five victories have come on home soil. For the Americans to stand a chance of winning, they need their baying mob of imbeciles to caress their egos every step of the way. Like one of those brainless bastards from your childhood, the one that pulled down your shorts during the school’s Christmas assembly (f**k you, Paul Jennings), they only have the courage to keg you if they’re backed up by a giggling group of reprobates. Team Europe needs to shut those groupies up.

They need to silence the pudgy, basement-dwelling, irritants, stuffed on cookie dough and pissy beer, pausing between mouthfuls of hotdog so they can scream ‘Baba booey’ until their jelly faces turn red.

They need to stun the angry, unwashed, Make America Great Again swarm, desperately gripping their concealed-carry compensators and belting out a mini-erection inducing ‘mashed potato,’ hoping to impress their cousin.

They need to smash the obnoxious dads, with their shiny teeth, Lego man hair, medicated ex-wives, and resentful children. Squeezed into their cargo shorts and boating shoes, they’ll bellow ‘get in the hole’ whilst high-fiving all the other members of the Dentists’ Big Game Hunt Society.

While Pete Willett’s article was written from an admittedly biased point of view and with the type of tongue-in-cheek humor that endeared him to U.S. fans during the Masters, European Captain Darren Clarke wasn’t taking the post as satire.