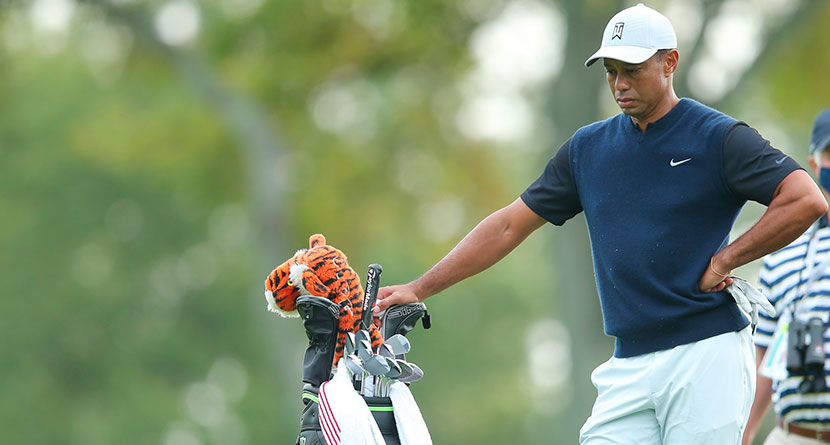 Despite the low scoring on the first day of the 120th US Open, there were big scores to be made on the famed Winged Foot West Course, especially if a player was unlucky enough to draw a gnarly lie in some of the course’s graduated rough.

On a few occasions during his first round, Tiger Woods was mere inches away from sitting pretty in the fairway only to see his ball trundle into the depths of the bluegrass rough that frame the historic course.

While penal, the rough didn’t prohibit players from having a go at the green complexes very often, but when Tiger’s drive on the par-4 8th hole leaked off the left side of the fairway, his ball dove to the bottom of the rough forcing the 82-time PGA Tour winner and 15-time major champion to hack out like any weekend golfer.

With 172 yards to the hole, Woods was able to advance the ball only some 65 yards into a cross bunker some 100 yards short of the green.

Tiger, barely misses the fairway, can't get it more than 20 feet into the air from 172 yards. pic.twitter.com/ZSs7a0Fz04

Woods would go on to bogey the hole to move to 2-over par for the tournament.

“It seemed like most of my drives on the front nine landed in the fairway and ended up in bad spots, and I tried to stay as patient as possible,” Woods said after the round.

Of course, this is Tiger Woods we’re talking about here, so one bad break and relatable result did not define his round. Woods bounced back from the bogey by making three consecutive birdies and getting to 1-under par for the tournament before a poor finish to the round saw Woods give all three birdies, and then some, back to the field.

Woods made back-to-back bogeys on Nos. 13 and 14 before getting one back with a birdie on the par-4 16th, but a bogey-double bogey finish left him at 3-over par and eight shots back of his playing partner and first-round leader Justin Thomas.

“I don’t see any reason why it won’t get harder and get more difficult,” Woods said of a relatively benign Winged Foot, by Winged Foot and U.S. Open standards. “We have a long way to go. This is a long marathon of a tournament. There’s a lot of different things that can go on. I just wish I would have finished off my round better.”