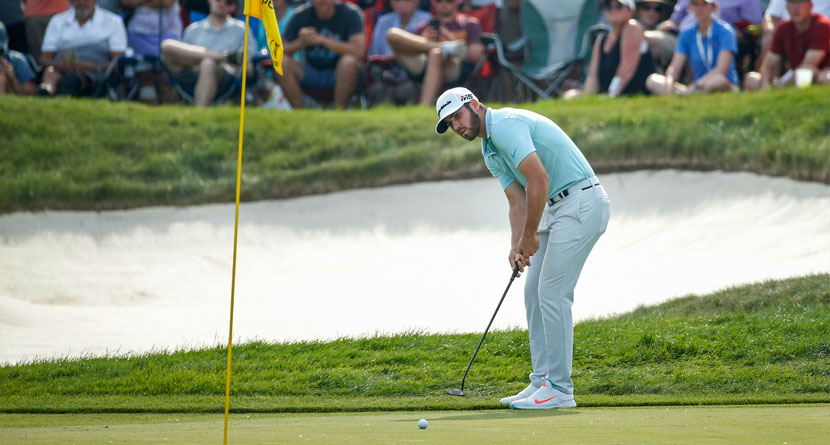 Playing in the final group alongside Collin Morikawa, Wolff shot a 1-under par 34 on the front nine, capped by a three-putt bogey on the ninth green, but turned up the heat as he turned and headed for home. Birdieing three of the first six holes on the back nine, Wolff held a one-stroke lead through 15 holes.

While the recent college standouts were dueling down the stretch, Bryson DeChambeau made a late run of his own to finish birdie-par-eagle to reach 20-under par and take the clubhouse lead.

With Wolff and Morikawa needing birdie on the 18th hole to force a three-man playoff, both set themselves up beautifully. Wolff’s second shot found the greenside fringe and Morikawa covered the flag from 204 yards, leaving himself 22 feet for eagle.

Before Morikawa could attempt to overtake DeChambeau’s mark of 20-under par, Wolff authored one of the shots of the year.

“I had a blast out there, and to make that putt was everything. You know, for me it was just kind of staying calm, doing what I do. And not a lot of putts were dropping today. I kind of told myself, you know, this wouldn’t be a bad time for one to go my way.

“It was the most excited I’ve ever been. I’m usually not an emotional guy at all, but tears definitely came to my eyes when I stepped off and picked that ball up out of the hole.”

Wolff’s résumé of accolades was already long, but with a win this early into his professional career, the expectations are elevated even more. Aside from becoming the third man to win the NCAA Individual Championship and a PGA Tour event in the same season — joining Tiger Woods and Ben Crenshaw — Wolff is in even headier company when it comes to what this win could portend.

According to The 15th Club’s Justin Ray, Wolff becomes just the seventh player in the last 80 years on the PGA Tour to win before the age of 21. All six others have gone on to win at least three major championships — Woods, Seve Ballesteros, Phil Mickelson, Raymond Floyd, Rory McIlroy and Jordan Spieth.

While the hype train is running at full steam, Wolff will have the weight of expectation following him around for the remainder of his career.

One thing that he won’t have to worry about this week as he tees it up in the John Deere Classic: a hangover. The 20-year-old already had a celebratory drink in mind shortly after the fateful putt dropped: a virgin pina colada.

How does a 20-year-old celebrate a win? pic.twitter.com/h8MD8aiVxI