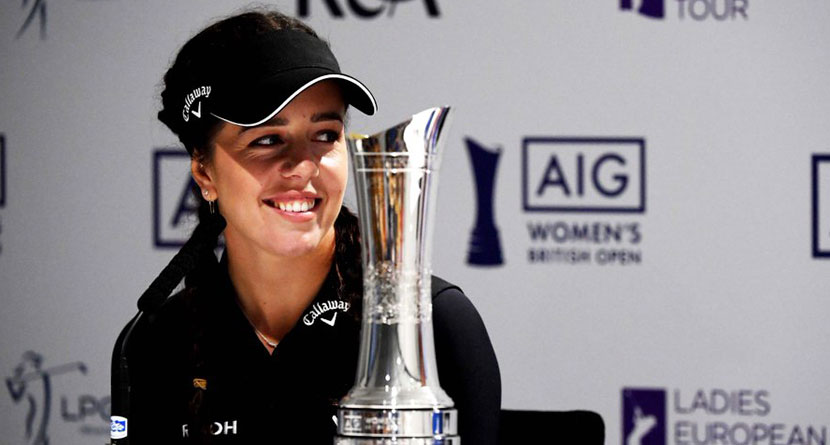 The LPGA Tour’s final major of the season is taking place this week at the AIG Women’s British Open at Woburn Golf Club in England.

Defending champion Georgia Hall spoke to the press on Tuesday, expressing her desire to not only defend her 2018 Women’s British Open title to boost her career résumé but also to have another shot at holding onto her trophy for another year without having it stolen.

That’s right, in her pre-tournament press conference, Hall relayed the story of how the Women’s British Open Trophy was stolen out of the trunk of her car two months ago.

“(Thieves) smashed my back window, like 12 o’clock in the middle of the afternoon,” Hall said. “I don’t know if they knew it was me or not, because it was in the box and everything. And I had golf clubs as well, and they didn’t take that. A bit strange.

“Obviously, I feel a bit silly having it in the car. Maybe I should have took it out. But you know, some things happen like this in life and you can’t… you know, just get on with it, I suppose.”

Hall doesn’t have high hopes for a safe return of her stolen trophy, saying that the parking lot where her car was broken into did not have security cameras and therefore police were left with little to go on.

“They probably melted it down,” she said.

The tournament kicks off on Thursday morning about three hours north of Bournemouth, where Hall was raised. She will once again have her father, Wayne, on the bag. She tees off alongside Brooke Henderson and Mamiko Higa in the first two rounds at 12:16 p.m. local time, 7:16 a.m. EST.