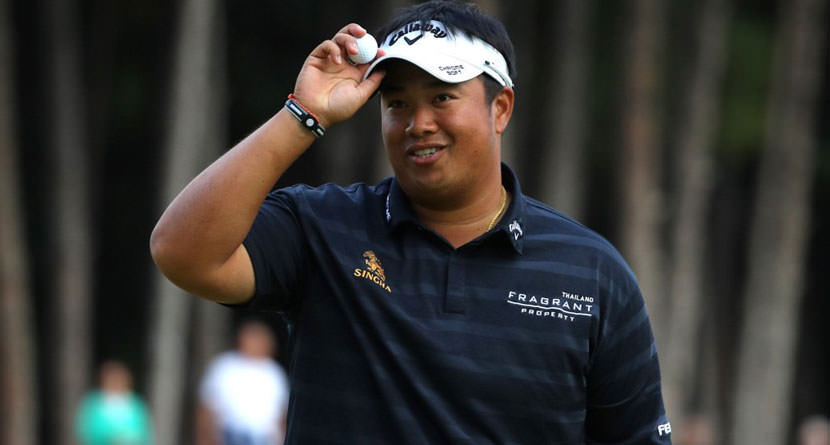 Kiradech Aphibarnrat isn’t a household name. What he is is one of the better golfers in the world, currently ranked No. 31 in the Official World Golf Rankings after winning on the Asian Developmental Tour this past weekend.

So, what did one of the Top-50 golfers in the world do when he met Tiger Woods for the first time at Bay Hill for the Arnold Palmer Invitational this week?

Ask for an autograph, of course. And not just any autograph. He asked Woods to sign his golf hat.

Just the 31st-ranked golfer in the world asking another player for an autograph. Happens all the time. pic.twitter.com/UAFOuJzgOA

Yes. That’s right. Aphibarnrat walked up to Tiger and asked him to sign his hat and then wore it all around the course on Tuesday.

How starstruck is Aphibarnrat? Sean Martin of PGATour.com ran into him again on Wednesday

Aphibarnrat isn’t a slouch on the course and has a European Tour win under his belt already this season. He has finished T-6 in both of his previous appearances at Bay Hill.

Speaking with Golfweek.com’s Bill Speros, Aphibarnrat confirmed that he will be using the visor in competition.

“It will be funny if we played together on the weekend,” Aphibarnrat said.

Woods didn’t think twice when signing the visor, Aphibarnrat reported. “He didn’t really say anything. I don’t think he recognized me.”

If the Asian John Daly gets his wish and a pairing with Woods on the weekend, there will no doubt be some explaining to do on the first tee.