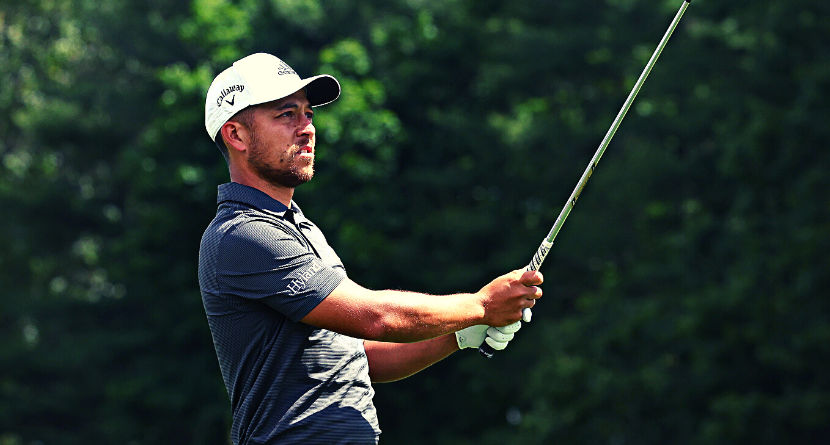 Schauffele’s name had been included alongside Brooks Koepka, Collin Morikawa and Viktor Hovland in an explosive report from Golf Monthly suggesting a second, more significant wave of defections was imminent. Since then, Koepka has indeed jumped ship, but Morikawa, a fellow Adidas ambassador, has joined Schauffele in pledging support for the Tour. Hovland’s intentions are not yet known.

Appearing on The Zach Gelb Show on CBS Sports Radio, the reigning Olympic gold medalist vowed to help the Tour retain its remaining stars as what Monahan recently termed an “arms race” with the Saudi-funded rebel circuit intensifies.

Schauffele provided some of the most candid commentary on the subject to date, acknowledging what many players have danced around: the money factor.

Ultimately, though, the 28-year-old said he realized his desire to win major championships and burnish his legacy outweighed the cash windfall. For now.

.@XSchauffele reacts on The Zach Gelb Show to @BKoepka leaving for @LIVGolfInv & explains why Xander Schauffele plans on trying to keep as many golfers as possible on the @PGATOUR. @CBSSportsRadio

“Yeah I’m here,” Schauffele said. “I met with Jay, we had a player meeting today. I met with Jay myself yesterday and I see myself right now trying to find a way to keep guys on the Tour versus being one to bail.”

He added: “I’m very happy with what’s going on the Tour for the most part and I feel like there’s enough here. I know we’re competing against a big pot of money that’s sort of never-ending, you can strike out a million times but there’s still gonna be on that plate swinging so it’s a hard competitor to go up against but I feel like there’s enough on this Tour and enough talent to make it the best in the world and keep it the best.

“I’m not the first one to sit here and lie to somebody, the numbers being thrown around are very obnoxious. There are certain numbers that even fans of mine, if they looked at it they’d tell me I’m an idiot for not going, but right now, I’m 28 years old, I want to win major championships, I want to win PGA Tour events, and I really think we can make this product on the PGA Tour — it’s been the best and now there is competition — and we can keep it the best with the talent we have, we just kind of need to unify and keep it together.

“So to any one of my fans, words are words, and actions speak louder than words, and right now my actions are to stay on the tour and you’ll see me out here competing on the PGA Tour circuit.”