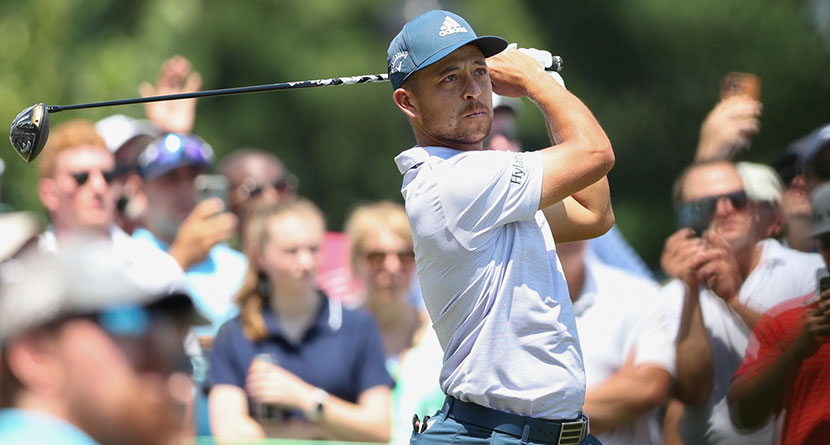 Winning isn’t always pretty, but whether someone has their best stuff or their “worst stuff,” as Xander Schaufffele described his final round on Sunday, a trophy is a trophy.

“This was stressful,” Schauffele said. “I’m not going to put makeup on the pig here. It was a very average day, probably my worst stuff this week. You can’t get ahead of yourself in links golf. I was ahead, behind, ahead, behind. I just kept my head down.”

Coming over to the British Isles with an Olympic gold medal, a Zurich Classic of New Orleans title and the recent Travelers Championship title in tow, Schauffele won the JP McManus Pro-Am in Ireland on Tuesday before teeing it up on Thursday in the first-ever co-sanctioned PGA Tour-DP World Tour event, the Genesis Scottish Open.

Opening in 2-over par 72, Schauffele got back in the mix with a Friday 65 and took the 54-hole lead following a Saturday 66. Opening birdies on 1 and 2 stretched Schauffle’s lead on Sunday, but a rough patch through the middle of the round forced the World No. 5 to steady the ship and steer it home with less than his best.

Thank you @ScottishOpen 🏆 for putting on a world-class event, and thank you to the fans for all your support! 🏴󠁧󠁢󠁳󠁣󠁴󠁿 It was a tough start, but we got the job done! @PGATOUR @DPWorldTour pic.twitter.com/U4x7rf876x

Schauffele overcame a three-bogeys-in-four-holes stretch around the turn to birdie the 14th and 16th holes, giving him a two-shot cushion playing the 18th.

“It was sucky,” Schauffele said of his rough patch. “I wasn’t playing well. Some of the shots late in the round yesterday were creeping in early on which was a bit of trouble. I had to dig deep and stay really patient. It was a grind. It was weird, the wind really laid down there and it made it seem easier and that probably helped a bit as well.

Riding a wave of confidence, Schauffele headed about 80 miles up the east coast of Scotland from North Berwick to St. Andrews for this week’s Open Championship even if wining the week prior can throw things a little out of whack.

“To be honest, a bit rushed,” Schauffle said when asked how he was feeling coming into the Open. “I’ve never played St Andrews. I’ve never played the Old Course so I have a lot of homework to do. I have to use this time, going down at eleven o’clock at night to my advantage to try to prepare to the best of my ability. Going to rely a lot on my caddie to do that.

“I’m tired. I’ve played a bit and I need a rest and I need to get ready for the week. I’m not even thinking about Sunday quite yet. I need to prepare.”