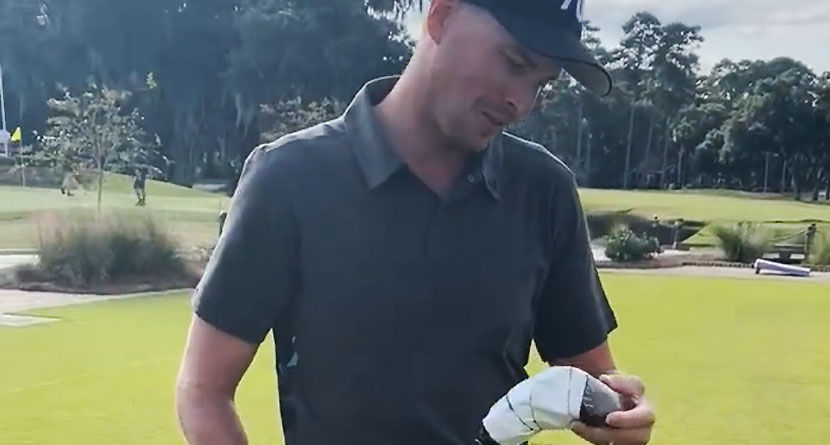 The path to professional golf is paved with oddities. Whether it’s a unique swing or an uncommon technique, golf is a meritocracy.

One of the great quotes about professional golf comes from Craig Stadler, who upon hearing a wet-behind-the-ears rookie bragging about his amateur accomplishments, walked up to the young buck and said, “You see the guy next to you? And the guy next to him? Every one of them, All-Americans. There’s an NCAA Champion, a U.S. Amateur champion, a British Open champion — hell, some of these caddies were All-Americans. So just so you know, nobody here gives a damn if you’re an All-American, or if you even went to college at all. All anybody here wants to know … can you play stick?”

Therein lies the beauty of professional golf, because if you can muster up the courage and funds, you can go out and find out the answer to that question: can you play stick?

Zack Fischer, a 32-year-old University of Texas at Arlington alum, can play stick.

Eight years ago, Fischer earned medalist honors at the first Korn Ferry Tour Q-School, and again in 2021, he bested a field of 140 players to earn full status on golf’s Triple-A circuit in 2022. While Fischer’s career is far from unusual for many pros chasing the dream, a certain training aid that he credits a lot of his recent success to is.

Using an old “Greatest Big Bertha” Callaway driver, Fischer’s swing coach, Jeff Jones, had a mad scientist moment. Removing the grip from the driver, Jones threaded six half-inch washers down the shaft of the club and duct-taped the head of the driver to keep them in place, giving birth to what Fischer calls “the Swing Rod.”

Fun fact: Zack Fischer was the medalist at the first #KornFerryTour Q-School final stage in 2013.

“It’s a beauty,” Fischer told GolfChannel.com’s Brentley Romine. “It’s a club that’s got six half-inch washers on it. Can’t see them underneath (the tape), but they just make the club really heavy.”

Fischer uses the club to warm up, saying it helps him to work on swing mechanics that can be grooved by swinging it both fast and slow.

“It helps me feel load and leverage on the club,” Fischer said. “I’ve always had a real short swing, so it just helps me get longer with more ark. … I make a full turn with it, and when I transition, the club will load, and then I can just turn around as fast as I can.”

The weighted club has added some distance for Fischer as well who will need plenty of it as he heads towards his fifth full season on the Korn Ferry Tour after failing to make more than two starts each of the past three years.

“I had the same kind of peace I had back in 2013,” Fischer said of his medalist performance. “I’ve made a lot of strides in my mental game and it just really, really paid off today. It was awesome. I had a double bogey on No. 10 that really could have derailed my round, and probably would have in the past. I pulled through it and shot even (par) on the back nine, and it was good enough. It was awesome.”