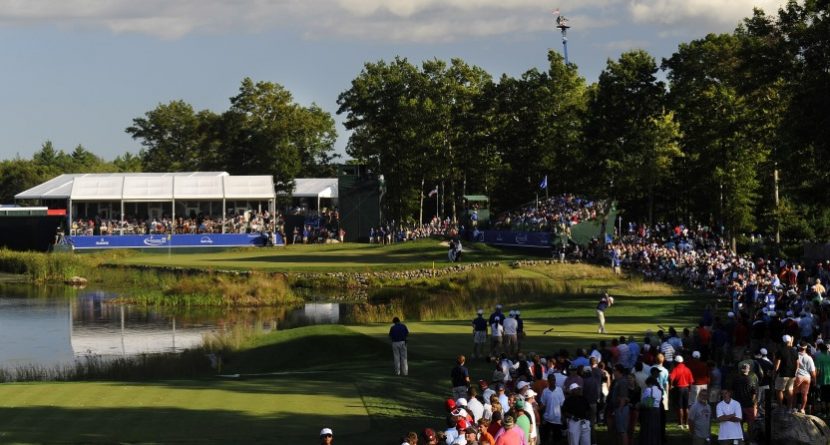 Following the first round of the FedExCup playoffs in New Jersey, the PGA Tour moves four hours up I-95 to TPC Boston in Norton, Mass., for the Deutsche Bank Championship this week. The event once again plays out over Labor Day Weekend, allowing the tour’s top 100 players to tee it up for a Friday start and Monday finish.

New leader atop FedExCup standings, but a familiar favorite
Hunter Mahan is your new leader in the FedExCup standings, courtesy of his win at The Barclays and the 2,500 points that come with it. But Rory McIlroy – world No. 1 and No. 2 in the FedExCup – is the Deutsche Bank favorite. He showed human tendencies by opening with a 74 last week, but showed his McIlrorian powers by carding a 65 the next day. Back-to-back 70s on the weekend tied him for 22nd, his first “loss” since mid-July. The kid owns four majors but has never won the FedExCup, so he needs to grab a win here soon if he wants the $10 million bonus. Henrik Stenson is the defending champ at TPC Boston, which he won before also taking the Tour Championship last year, which netted the Swede the FedExCup title. McIlroy won the Deutsche Bank title in 2012 before finishing second overall behind Brandt Snedeker.

Everyone can find their place at Patriot Place
Despite its name, TPC Boston is a good 35 miles outside of downtown Boston, so the closest must-see destination is another place commonly thought to be in Boston: the home of the New England Patriots. Gillette Stadium is in Foxborough and it won’t be in use this week with the Pats away playing a preseason game against the New York Giants. But Patriot Place will be open – that’s the shopping/entertainment venue that surrounds the stadium. There are enough restaurants to suit everyone’s tastes, enough shops to dress anyone, and The Hall, which is a Patriots museum that also holds the official Patriots pro shop. Get authentic Italian at Sabatino’s
For a spot just minutes away from the golf course, head to Sabatino’s Trattoria for the finest authentic Italian food in Norton. The Ferrara family serves up all the traditional pastas, pizzas and calzones, but we recommend the Orecchiette Rapini: “Little Ears pasta with hot sausage, broccoli rabe, and pecorino cheese.” Sabatino’s earned a Certificate of Excellence for 2014 from TripAdvisor.com.

Land at Plymouth Rock
If a drive into the big city doesn’t suit your fancy, head due east instead to Plymouth Rock. That’s where, in 1620, Europeans first founded a New England colony. The Rock resides in Pilgrim Memorial State Park, which gets nearly a million visitors per year. It also features a replica ship in which the first Pilgrims sailed over, dubbed The Mayflower II.