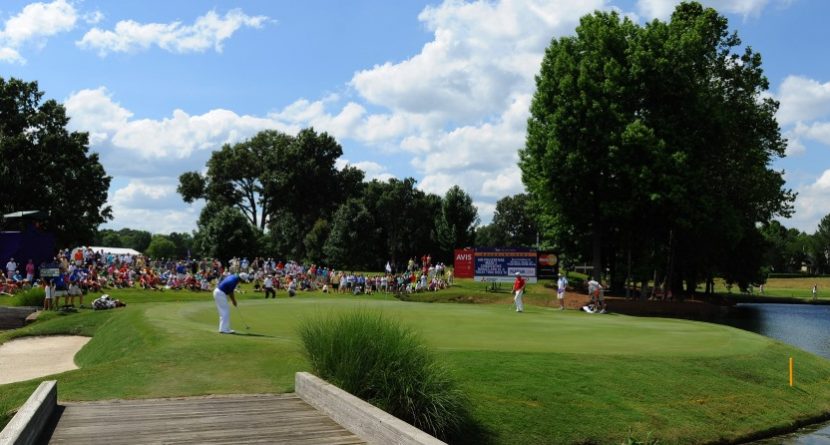 En route to the U.S. Open next week in Pinehurst, N.C., the PGA Tour swings through Memphis this week for the FedEx St. Jude Classic at TPC Southwind. If you like food and music – and really, who doesn’t? – you won’t find many tour stops better than this one.

Last stop before Pinehurst
It isn’t easy being an event the week before a major, because many guys opt for rest and take the week off. But then again, there are always those guys who yearn for fine-tuning, like Phil Mickelson, who hasn’t recorded a top-10 on the PGA Tour all season. He’s in the field this week at TPC Southwind, where Lefty tied for second a year ago. Dustin Johnson and Zach Johnson are also big names to watch. Part of what helped Mickelson last year was his mastery of the 239-yard par-3 14th, which he birdied in three of his four rounds. That hole ranked as the course’s second toughest in 2013, and the toughest the year before. Water guards the narrow, undulating green all along the right. You can’t escape the music
When in Memphis, it’s practically illegal and impossible not to get a music history lesson. There’s always Graceland, the former estate of Elvis Presley, but we suggest visiting Sun Studio, which calls itself “The Birthplace of Rock N’ Roll.” The joint discovered Presley, Johnny Cash and Jerry Lee Lewis, and is where Presley recorded his first song. Take a tour and you might get to hear some of the recordings the studio still performs today. And if Sun Studio doesn’t fill your need for Presley, hop on the free shuttle that will take you over to Graceland.

You can’t escape the BBQ
When in Memphis, it’s also practically illegal and impossible not to grub on some barbecue. There are fantastic spots all over town, but why try one or two restaurants when someone can drive you around town to sample up to half a dozen? Tastin’ ‘Round Town specializes in Memphis food tours, offering a Taste of Downtown, a Downtown Burger Tour, and a Sweet Life Downtown Dessert Tour. But the one you want is the BBQ Tasting, which will give you dry-rubbed or saucy wet ribs, pulled pork, pork nachos and BBQ spaghetti.

There’s more than just BBQ
Not a fan of barbecue? What’s wrong with you? We kid. Maybe you’d prefer some simple Southern cooking? Then make your way to Gus’s World Famous Hot & Spicy Chicken. There’s one downtown, but closer to TPC Southwind is the Collierville location. The menu is simple – chicken or chicken (with traditional sides) – but the recipe is not. They won’t divulge what makes the fried chicken so famous, but there’s always a hint of heat. GQ Magazine once claimed Gus’s was among the top restaurants in the U.S. worth hopping on a plane for a meal. So yeah, you won’t be disappointed.

Party on the Peabody roof next to ducks
After all the food and music you’re bound to consume in Memphis, you’ll want a nice, quiet place to lay your head. The Peabody hotel is not that place – at least on Thursdays. That’s when it hosts Peabody Rooftop Parties with live bands, a snack buffet, sponsored drink specials, and great views of sunsets over the Mississippi River.

Yet, they can’t hold these concerts every night because it might upset the mallards residing in the Duck Palace. That’s where the stars of the Peabody lay their heads – and maybe the occasional egg. Every day at 11 a.m., the hotel’s Duckmaster leads five North American mallards down from their house, along a red carpet, and into the lobby’s marble fountain, where they go about their day. At 5 p.m., the ducks are then led back up to their palace, a $200,000 structure comprised of marble, glass and another fountain. Lucky ducks.