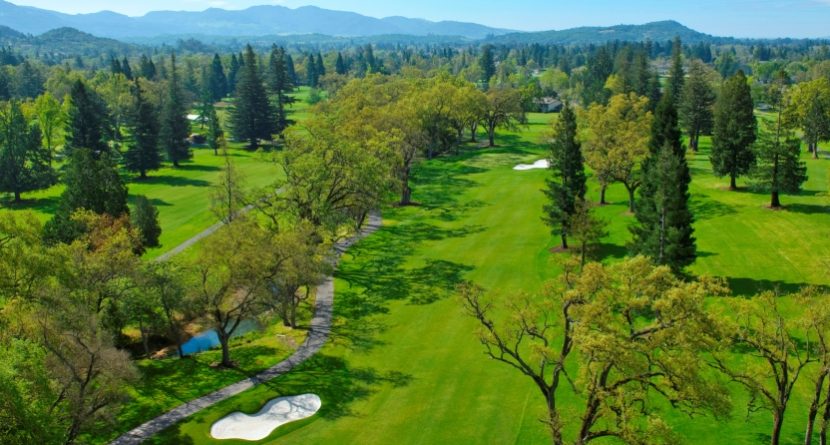 Before it was even gone long enough for you to miss it, the PGA Tour is back. The first event of the 2014-15 season tees off Thursday with the Frys.com Open.

Barely three weeks have passed since the last ball of the 2013-14 season dropped into the cup and Billy Horschel went home with the Tour Championship and FedExCup titles, which combined to give him $11.4 million. The next quest for that bounty commences this week at the Silverado Country Club in Napa, Calif.

First time in Napa
The first stop of the season doesn’t typically attract a bunch of big names, but there are four Ryder Cup players in the field: Frys.com Open defending champ Jimmy Walker, Matt Kuchar and Hunter Mahan from the U.S., and Lee Westwood from Europe. Those gents are among the favorites on a course most will see for the first time. The past four Frys.com Opens were played at CordeValle Golf Club in San Martin, Calif. The North Course at Silverado is 7,203 yards and a par 72, designed by Robert Trent Jones Jr. in the 1960s.

You might have heard: Napa has some wine
Surely at least a dozen or so players opted to play this week because of the tournament’s new location: wine country. Napa Valley is arguably the most renowned wine region in the nation and you really can’t go anywhere in Napa without feeling the industry’s presence. There are way too many wineries to visit in one stay, but a wine tour is the best way to hit up as many as possible. You can take a limo around to various wineries, or a basic shuttle, or get some exercise and ride a bike. Or just venture out on your own – within minutes of the golf course are Del Dotto Vineyards (which also offer cave tours), William Hill Estate Winery, Luna Vineyards, and plenty more.

No whining about dining
With all that drinking you need to be eating too, and you won’t have any problems finding good restaurants. Right in downtown Napa is Cole’s Chop House, which is recommended by the Michelin Guide and was a 2014 OpenTable Diners’ Choice award winner. And at the Napa Valley Opera House is the City Winery, which offers Mediterranean cuisine and plenty of wine (of course), all of which you can consume while watching a concert.

Wine and dine and ride
Yet the most unique restaurant in the region is the Wine Train. Hop aboard in town and ride off into the valley while eating a gourmet meal. The wine train serves lunch and dinner, and you can bring your own wine or buy a bottle on board. You can also choose from one of four winery tour packages, meaning you receive the gourmet meal on the train, then get to visit one or two wineries in the middle of your trip.

Just try to conquer Rockzilla
And believe it or not, not everything to do in Napa has to involve wine. If you’re more of an adventurer rather than a wine connoisseur, or you need a place to let the pent-up energy out of your kids, find your way to Rockzilla, a rock climbing gym. If you’re a beginner and have never climbed rocks before, there’s a wall for you. If you’re an expert and need a serious challenge, there’s an arch or chimney for you.