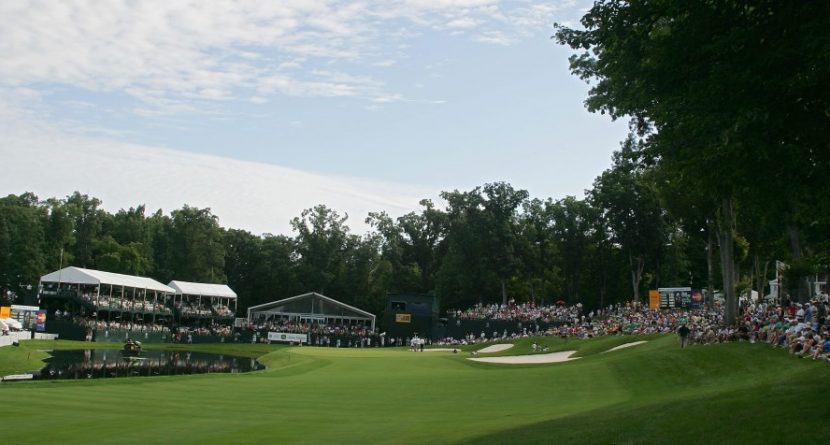 The best golfers in the world are scattered across the world this week as they implement various plans to prepare themselves for the season’s third major, the Open Championship, which commences July 17 at Royal Liverpool in Hoylake, England. Some are already across the pond playing the Scottish Open. Some are at home resting. And some are in Silvis, Ill., for the PGA Tour’s John Deere Classic.

It’s already been a year since Jordan Spieth won
Kids just grow up so fast, don’t they? A year ago, Jordan Spieth was a 19-year-old prodigy seeking status on the PGA Tour. Then he won the John Deere Classic in a playoff, which he got into with the shot of the year. That earned him a spot in the Open Championship, the PGA Championship, and FedExCup playoffs, at which his performances were impressive enough to earn a captain’s pick for the 2013 Presidents Cup. Spieth hasn’t won since last year’s Classic, but he took a T-2 at the Masters, has moved into the top 10 of the world rankings, and is now a bona fide star as he returns to TPC Deere Run to defend his title. That next win is on the horizon. We can all feel it. Frank’s boasts the best Quad City-style pizza
Silvis is not a big town. It’s not even included in the metropolitan area known as the Quad Cities. But it’s close enough, as it sits just outside of East Moline, Ill. Regardless, Frank’s Pizza, according to its website, has been “Serving Delicious Quad City Style Pizza Since 1955.” It might as well add “The Best” to that claim as well. What is Quad City-style pizza? Malt crust, spicy sauce, toppings under the cheese, and strips instead of slices. A couple years ago, Frank’s was named to Parade magazine’s honor roll for America’s Best Pizzerias.

Great beer at the Great River Brewery
The biggest city among the Quad Cities is Davenport, a quick 20-minute drive from TPC Deere Run that takes you into Iowa. Cross the border and stop at the Great River Brewery, which sits a block away from the Mississippi River’s Locks and Dam 15, the largest roller dam in the world. That inspired the brewery to name one of its signature brews Roller Dam Red. Other beers include Widespread Wit (unfiltered Belgium white), Hopapotamus (double dark rye pale ale), and Dirty Blonde (chocolate ale). A brewer will take you on a tour of the premises, or you can just visit the tap room.

You could eat a chocolate shoe
If beer and pizza aren’t your thing, maybe chocolate is. For that, you must stop at Chocolate Manor in Davenport. Want some chocolate-covered potato chips? No problem. Life-sized chocolate shoes? Done. An 8-foot tall chocolate menorah? You got it. Bob and Rose Mohr have nearly 10,000 molds in their store, so if they have a mold for it, you can buy it. But they make their business off the more common chocolate goodies like covered strawberries, toffee, or port wine.

River Bandits are America’s pastime at its core
With small towns come minor league baseball teams, and the Quad Cities River Bandits, a Class-A affiliate of the Houston Astros, call Davenport home. Club seating costs you $13 a ticket, the bleachers set you back $7, and a spot on the grassy knoll in left field is $5. Of course, those tickets just get you into Modern Woodmen Park, but you could spend your evening at the beer garden in right field, or in the Kids Zone along the first-base line.