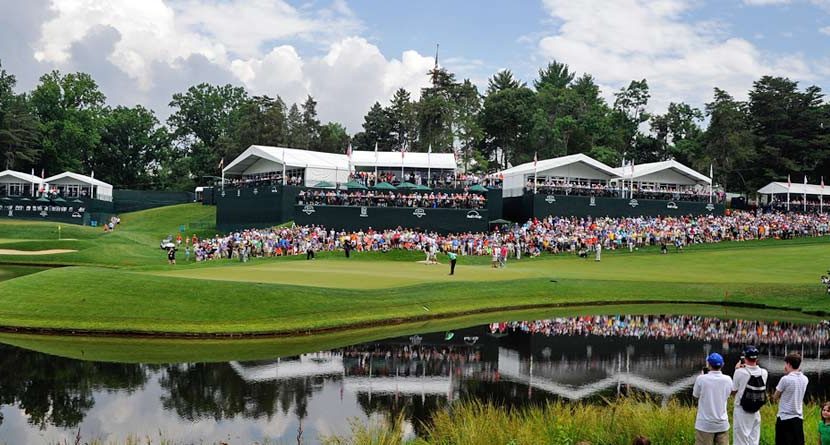 Now that the men’s and women’s U.S. Opens are over and done with, we can all relax and enjoy a nice, boring week on the PGA Tour as it returns to the Washington D.C.-area and Congressional Country Club in Bethesda, Md., for the newly-sponsored Quicken Loans National. Just a few top-tier guys trying to earn a paycheck in between majors.

Oh, and some guy named Tiger Woods is back. So much for nice and quiet.

Ranked No. 1 in the world when he went under the knife for a pinched nerve in his back in March, Woods is now fifth and looking to make up for lost time. He wants to get into the season-ending FedExCup playoffs, and that mission starts Thursday at a tournament that benefits his Tiger Woods Foundation.

Here are five things you need to know about the Quicken Loans National and its surrounding area:

Congressional is a long test
Formerly the AT&T National, the Quicken Loans National will be played at Congressional for the sixth time in the past eight years. The club’s Blue Course served as the site of the U.S. Open in 1964, ’97 and 2011, of the PGA Championship in ’76, and of the U.S. Senior Open in ’95. The 7,569-yard, par-71 layout is one of the longest on tour, making it also one of the toughest. Only six holes played under par last year. The longest is No. 9, a 636-yard par 5 with a ravine protecting the front of the green; the toughest is No. 11, a 489-yard par 4 with a creek running along the right. It’s a Topgolf town
Should you ever find yourself within 50 miles of a Topgolf location – the trendy driving range/entertainment venues – we suggest forgoing all other obligations and making a visit. Topgolf Alexandria sits 22 miles south of Congressional, so hop on the Capital Beltway and get swinging. Bring the family, bring some buddies, or bring a date and tee off from the two-tiered driving range, taking shots at lighted targets. The closer you land your micro-chipped ball to a target’s bulls-eye, the more points you score in whatever game you’re playing. Order food and drinks while you play; or saddle up to the bar; or chill out on the patio; or play mini-golf. Spy a new place to visit
DC is one of those places every American must visit at least once, if not multiple times. Our nation’s capital is overflowing with history and memorials and museums. There are always the fantastic Smithsonian museums, but if you’d like to step off the beaten path, make your way to the International Spy Museum. It boasts the biggest collection of espionage artifacts available for public display, and is the only public U.S. museum completely dedicated to espionage. Was George Washington a spy? The Spy Museum makes a case. No better place to watch Team USA
Maybe you’re in town to watch the golf tournament. Maybe you have tickets for the first round on Thursday. Maybe you could sell them or make a trade for a later round? Because on Thursday at noon, if you’re anything resembling a sports fan, you should attempt to get a seat at the Laughing Man Tavern. It serves food and alcohol, which is all you need to know; the real reason you’re there is the USA vs. Germany FIFA World Cup game. Some of the most fervent fans of the beautiful game reside in our nation’s capital, and the Laughing Man Tavern is the home bar for the DC chapter of the American Outlaws, an unofficial U.S. national team supporters group. The Outlaws claim that the District had more TV viewers of the last U.S. game than any other market, and it looks like quite a few enjoyed themselves at Laughing Man: