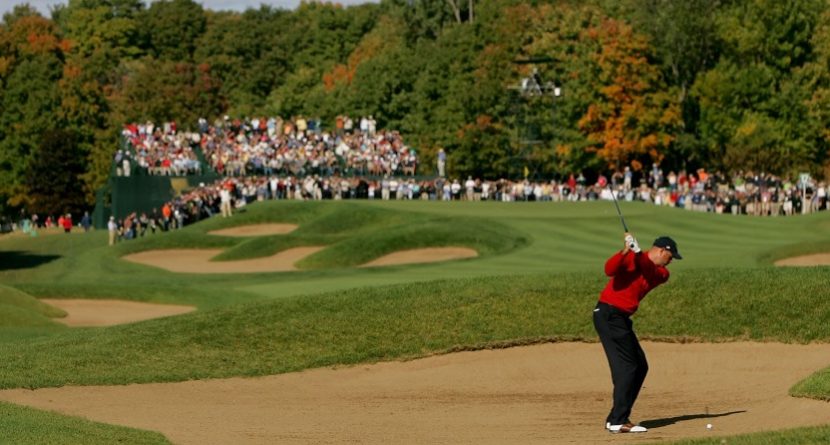 For a second straight week, PGA Tour stars will ply their trade outside of the United States. Following a wire-to-wire win by Rory McIlroy at the Open Championship, the tour moves from Royal Liverpool to Royal Montreal in Ile Bizard, Quebec, just outside of Montreal. It marks the RBC Canadian Open’s first appearance at Royal Montreal since 2001.

Canadian Open returns to its roots
Royal Montreal has not hosted the Canadian Open in 13 years, but it does hold the honor of putting on the very first Canadian Open, in 1904. That came 31 years after the club was founded, giving Royal Montreal the distinction of being the oldest golf club in North America. This year’s tournament will be the club’s 10th time as host. Players will take on the Blue Course, which runs 7,153 yards for a par of 70. Some guys in this year’s field – like John Daly, K.J. Choi, J.J. Henry and Luke Donald – were a part of the 2001 tourney at Royal Montreal, while others – like Jim Furyk, Hunter Mahan, Stewart Cink, Ernie Els, Vijay Singh and Retief Goosen – took part in the 2007 Presidents Cup on this course.

Learn about the most storied hockey franchise ever
When in Canada, do as the locals do: consume all things hockey. When in Montreal, make a stop at the Montreal Canadiens Hall of Fame, which celebrates one of the greatest franchises in sports history. No team has won more Stanley Cups than the Canadiens, who have been playing elite hockey since 1909, longer than any other professional ice hockey squad. The team’s Hall of Fame displays exhibits celebrating all those championship teams, lets you step inside a 1950s train car replica, and check out a life-size version of the 1976-77 Canadiens locker room. It’s nearly 10,000 square feet of rich history at the Canadiens’ home arena, the Bell Centre, which you can also tour.

Fine dining is five minutes from the course
Downtown Montreal is about 30 minutes east of Royal Montreal Golf Club, so if you want to stay closer to the course, visit Bistro 1843 just five minutes away. It’s an upscale French restaurant that serves dinner only and allows you to bring your own wine. The bistro is run by a young husband, who does the cooking, and wife, who does the serving, so the menu is limited. But the salmon and ribeye steak have received rave reviews.

Cool off at the Super Aqua Club
Across the Lake of Two Mountains from Ile Bizard is the Super Aqua Club, a gigantic water park with slides, swings and a beach. The lazy ones can meander down the Lazy River; the thrill seekers can take a ride in the Squalls, high-speed water slides; or the whole family can have a picnic on the beach. There’s also the Wipe Zone, which is essentially an obstacle course on water, and the Tarzan Ropes, which are exactly what you’d imagine. A wave pool, water volleyball, a dry park – this place has it all.

Find historic charm on Rue St-Paul
If you’re one of those folks who enjoy old buildings and places that have maintained the look they held hundreds of years ago, Europe is probably your favorite getaway. But Montreal boasts some of that old world charm as well, so head over to Rue Saint-Paul, which is French for Saint Paul Street. It’s the city’s oldest street, was once its main avenue, and now resides in what is known as Old Montreal. The cobblestone street is lined with shops and restaurants, as well as historic landmarks such as the Bonsecours Market, formerly the city’s main public market, and Notre-Dame-de-Bon-Secours Chapel, a church built in 1771.