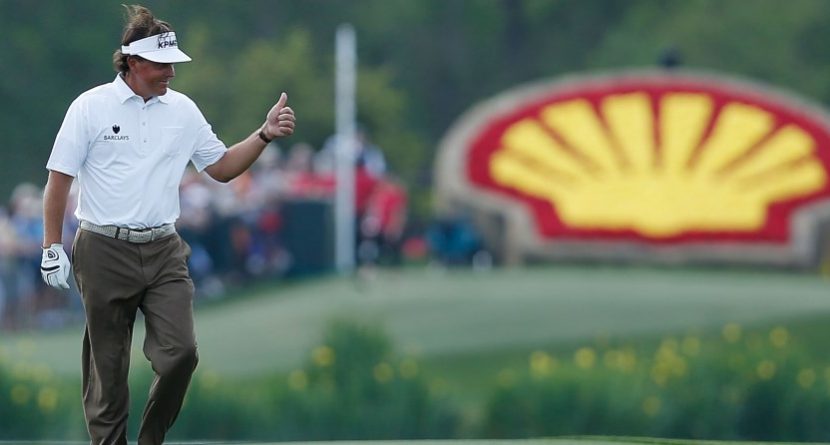 It’s the last week for fine-tuning prior to the first major of the year. Some guys opt to spend that time on their own, maybe practicing at a private course, while others are using the week to heal. But the majority of players owning Masters invites are in Texas for the Shell Houston Open.

New name, same course, tough finishing hole
Formerly known as the Redstone Golf Club, the Golf Club of Houston sits 20 minutes north of downtown Houston and makes a concerted effort to shape its course like the one players will see next week at Augusta National. That, in turn, gets a good crop of players to show up on their way to the Masters, and this year is no different. Henrik Stenson, Phil Mickelson, Rory McIlroy, Sergio Garcia and Dustin Johnson are top-10-ranked players in the field this week (Mickelson is playing despite pulling a muscle last week). They’ll all have to contend with one of the toughest finishing holes on tour: No. 18 is a 488-yard par 4 with a lake all along the left side. That accounted for 119 bogeys last year, 36 more than any other hole, and the second-fewest birdies (40). Play Topgolf
Topgolf is taking off in Texas. The Houston location of one of seven in the Lone Star State that is either already up and running or coming soon. Bring the family, bring some buddies, or bring a date and tee off from the three-tiered driving range, taking shots at lighted targets. The closer you land your microchipped ball to a target’s bulls-eye, the more points you score in whatever game you’re playing. Order food and drinks while you play; or saddle up to the bar inside or on the rooftop; or hit the dance floor; or play billiards or foosball or shuffleboard.

Get to the Galleria
It can get a little warm in Houston. It’s not sweltering this time of year, but rain is prominent in the forecast this weekend, so you may want to seek some shelter. The best place you could go (other than Topgolf) is the Galleria, Texas’ largest shopping center. Covering 2.4 million square feet are more than 400 stores and restaurants, two high-rise hotels, three office towers, a full-size ice rink, a state-of-the-art children’s play area, two swimming pools, a video arcade, and more. Shop at Neiman Marcus, Nordstrom or Ralph Lauren, and dine at Del Frisco’s Double Eagle Steakhouse, the Cheesecake Factory, or Kona Grill. Check out the Space Center Houston
Before Neil Armstrong famously declared, “That’s one small step for man, one giant leap for mankind” upon landing on the moon, he said, “Houston, the Eagle has landed.” He was communicating with the Manned Spacecraft Center in Houston, which was the world leader in human space flight operations for NASA. These days, you can watch astronauts in training, touch a real moon rock and take a behind-the-scenes tour of NASA. Find some BBQ
All the aforementioned attractions are a good drive from the Golf Club of Houston, but some good ol’ Texas barbeque is just down the road at Tin Roof BBQ and Steaks. The prices are great – $12 for a pound of ribs, $24 for an 8 oz. fillet – and the entertainment is a bonus. Live music on the outdoor patio takes place every Friday and Saturday night, and Thursday nights feature karaoke. The restaurant and its World Famous Texas Cheesesteak Sandwich were featured on the Cooking Channel’s “Roadtrip with G. Garvin.”