5 Things You Need to Know: The Memorial Tournament 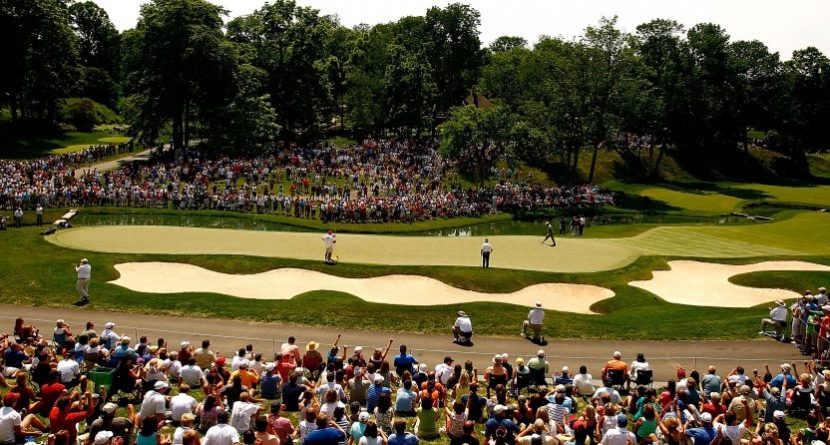 The PGA Tour visits “The Place That Jack Built” this week, and not surprisingly, a stellar field signed up to play. Seven of the world’s top 10 will tee it up in the Memorial Tournament at Muirfield Village Golf Club in Dublin, Ohio, which sits just outside of Columbus, or better known as the home of Jack Nicklaus.

Last week’s big-name winners are back
Rory McIlroy (sixth in the world) surged from seven strokes back to stun the BMW PGA Championship field last week at Wentworth, and he’s the favorite for the Memorial this week. World No. 1 Adam Scott fought off Jason Dufner in a playoff last week at the Crowne Plaza Invitational, and the Aussie’s making a rare back-to-back appearance this week. Also on hand will be Matt Kuchar (No. 4), Bubba Watson (5), Jason Day (7), Justin Rose (9) and Jordan Spieth (10). Many of those guys are familiar with the track, seeing as how they played it last fall for the Presidents Cup. Columbus enjoys it some Jack
It’s a mild surprise that Columbus hasn’t been renamed “Nicklaus” yet, but the town does pay homage to its favorite son. You’re not completely surrounded by Golden Bear mementos, but Nicklaus does completely surround the city. Interstate 270 encircles Columbus and is also known as The Outerbelt; but it’s also referred to as the Jack Nicklaus Freeway. That’s the highway you have to hop on if you’d like to travel from Jack’s course to Jack’s museum. Planted right on the campus of The Ohio State University, Nicklaus’ alma mater, is the Jack Nicklaus Museum, a 24,000-square-foot educational and historical mecca of all things Jack. Among the exhibits are the Nicklaus Family Room, Nicklaus Course Design Gallery, the Decades of Nicklaus, and a Memorial Tournament Gallery. Columbus enjoys it some statues
When a town really loves someone, it erects a statue. Such figures of Nicklaus exist at Muirfield Village and along Muirfield Drive south of the course. But much more impressive sculptures (no offense, Jack) exist downtown. First, there’s the 8-foot statue of Arnold Schwarzenegger on the front lawn of Veterans Memorial. It’s a tribute to the former bodybuilder hosting an annual Arnold Sports Festival in Columbus for the past 26 years. Secondly, just across the Scioto River from “The Terminator” is the world’s largest gavel. Why? Why not. Scale the country’s largest climbing wall
To get a feel for Columbus, you don’t have to look much further than the Scioto Mile. The system of parks, boulevards, bikeways and pedestrian paths runs along the Scioto River that cuts through town. Along the way is a 15,000-square-foot interactive fountain that will keep your kids plenty happy on a hot day, and the “country’s largest free outdoor climbing wall” to keep your adventurer’s spirit happy. The wall is 35 feet tall, but you must bring your own equipment. Increase your beer and food knowledge
Back near the golf course sits the 101 Beer Kitchen. You’ll be well fed, with entrees like the Jalapeno Popper Grilled Cheese, Carnivore Pizza, and Shrimp & Grits, but you really need to tap into the beer selection. The restaurant hosts monthly beer dinners with various brewers to pair food and drink, but it always boast a fresh selection of draft brews. There are 19 currently on tap, ranging from the Avery White Rascal (Belgian style wheat, unfiltered and spiced with coriander and Curacao orange peel) to the Nectar Ales Black Xantus (Imperial Stout aged in American oak barrels, infused with local coffee).

Other Hot Links:
– Jimmy Fallon Gets Personalized Justin Timberlake Balls
– The Fringe: Poulter Booted, Nantz ‘Not Good’ & Murray’s Advice
– Video: How Golf Balls Are Made
– To Push or Not To Push a Cart: Tour Pros Weigh In
– Which Colleges Produce the Best PGA Tour Pros?