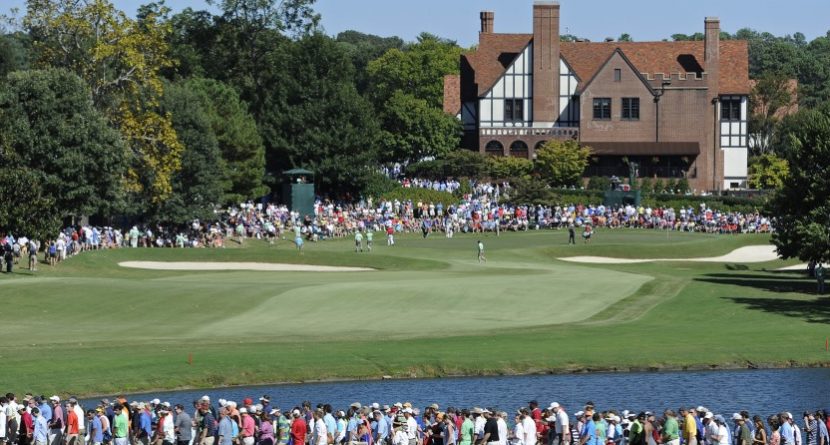 The 2013-14 PGA Tour season comes to a close this weekend with the Tour Championship at East Lake Golf Club in Atlanta. The top 30 players in the FedExCup standings are vying for the $10 million bonus, but some have more realistic shots than others.

Millions and millions of dollars at stake
Some guys like Hunter Mahan (No. 5 in the standings) and Bubba Watson (No. 3) are very familiar with East Lake, while some guys like Rory McIlroy (No. 4) and Billy Horschel (No. 2) have only played the course once before. Then there’s Chris Kirk (No. 1), who’s making his first start at East Lake. We mention these five fellows because with a win on Sunday, the $10 million prize that comes with winning the FedExCup would also be theirs. If one of the other 25 players takes the Tour Championship title, someone else may walk with the $10 million. This tournament isn’t a major, but there’s major money on the line – each of the top-five finishers in the FedExCup standings receives at least a $1.1 million bonus.

Home of the world’s favorite soda
The official name of this week’s event is the Tour Championship by Coca-Cola. It comes as little surprise that the maker of the world’s most popular soda sponsors an event in Atlanta because that drink was invented in the city in 1886. You can learn more about the history of the brand, and even sample more than 100 Coca-Cola beverages from around the world, by visiting the World of Coca-Cola in downtown Atlanta. Meet the famed Coca-Cola polar bear, get a closer look at the bottling process, and play around with those fancy touchscreen machines — Coca-Cola Freestyle dispensers — that are popping up at restaurants all over the country. Home of the 24-hour news cycle
Atlanta is the world headquarters for Coke and also for CNN, which basically invented the 24-hour news cycle. It launched as the first all-news station in the U.S., and was the first to air a full 24 hours of news coverage. By visiting the CNN Center, also in downtown, you can take a 50-minute guided walking tour. There is the Inside CNN Studio Tour, or the Morning Express Tour, which takes you behind the scenes of “Morning Express with Robin Meade.” Or there is the Inside CNN VIP Tour, where you can view an actual control room and go inside HD Studio 7, where most of CNN’s daytime programming takes place. Chill at Centennial Park
In between stops at the World of Coca-Cola and the CNN Center, or if you just want to chill, take a stroll around Centennial Olympic Park. It was built for the 1996 Summer Olympics and still operates the Fountain of Rings, the “world’s largest interactive fountain featuring the Olympic Ring symbol.” The water show, set to the sounds of music, plays four times a day every day. There’s a reason they call it Hotlanta, so you may want to cool off. Or if you’d prefer to stay dry, hop in the nearby 20-story Ferris wheel. SkyView has 42 climate-controlled gondolas offering spectacular views of downtown and the city.

Eat at Papa Joe’s BBQ Pit
East Lake is only seven miles east of downtown Atlanta, where most of the city’s action takes place, but if you prefer to stay near the course, you can do no wrong by visiting Papa Joe’s BBQ Pit just a few blocks away. It’s a meat lover’s dream: Pork Sausage Dinner ($5.15), Beef Brisket Dinner ($9.65), Ribs and Chicken Combo Meal ($12.95), Ribs and Pulled Pork Combo Meal ($13.50), or a Slab Family Meal ($26). Then there’s Red Velvet Cake waiting for you at the end. Of course, Papa Joe’s serves Coke too, and probably has a TV with CNN on.