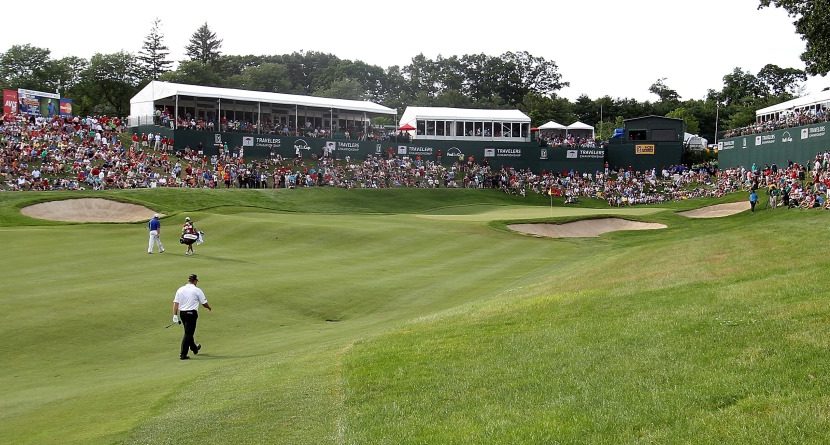 From one of the longest courses in U.S. Open history, the PGA Tour moves this week to one of the shortest tracks it visits every year: TPC River Highlands in Cromwell, Conn., just outside of Hartford, for the Travelers Championship. And just because it falls the week after a major doesn’t mean it’ll be devoid of stars.

Here are five things you need to know about the Travelers Championship and its surrounding area:

Short course, big names
Last week at Pinehurst No. 2, players clubbed their ball around 7,562 yards of golf course, the third longest layout in U.S. Open history. This week at TPC River Highlands, they will only need to travel 6,844 yards, typically among the top-five shortest courses on the PGA Tour. Both tracks carry a par of 70. Hoping to fare better in Cromwell than he did in Pinehurst is Bubba Watson, the reigning Masters champ and highest ranked player in the field (No. 3 in the world) who was cut last week. Joining him at TPC River Highlands will be Matt Kuchar (5), Jason Day (7), Sergio Garcia (8), Dustin Johnson (15), Zach Johnson (16) and Keegan Bradley (23). Fine art in the city
Right in downtown Hartford, the Wadsworth Atheneum Museum of Art is the oldest public art museum in the country, founded in 1842. The building is easy to spot because it’s the only castle-like structure in the area, and inside you’ll find the world-renowned Hudson River School collection, which consists of more than 65 landscapes painted by artists such as Thomas Cole, Frederic Church and Albert Bierstadt. The Wadsworth is said to be the first museum in America to start collections of contemporary American art.

Salute your palate
From TripAdvisor’s top-ranked attraction in Hartford, walk two blocks down to the website’s top-ranked restaurant: Salute. You’ll never find the upscale casual Italian restaurant empty because of dishes like Rose Pasta (sweet sausage, mushrooms, spinach, and a light tomato cream sauce with four-cheese tortellini) and Peppercorn Crusted Ahi Tuna (with vegetable spring rolls, a cucumber salad and ginger jus). The wine list features more than 40 different bottles, but the kind folks behind the bar will also serve you up one of their specialty cocktails or draft beers. Tell them Back9 sent you and put your drink on our tab.

Every game is on at Sam’s
When you’re not watching golf, take a trip down from TPC River Highlands to the other side of the Chester Bowles Highway and grab a table at Chicago Sam’s Sports Bar & Grille: 100 HD TVs (45 of which are big screen), three 100-square-foot HD movie screens, 20 beers on tap that change with the season, 30 bottled beers, tons of food (burgers, wings, nachos, tacos, etc.), pool tables, and live bands every Friday and Saturday night. Basketball and hockey season may be over, but the most popular sporting event in the world is ongoing. If you want to watch USA vs. Portugal on Sunday, this is your place.

It’s soccer season
If live soccer is more your thing, you’re in luck this week. The No. 1-ranked U.S. women’s national team is taking on No. 4 France on Thursday at Rentschler Field in East Hartford (where the UConn football team plays). The match is just a friendly, but it’s early preparation for the 2015 Women’s World Cup in Canada, where the Americans aim to get back on top for the first time since 1999. And who knows, the squad might just stick around in town and watch the men’s game Sunday. They were at Hartford’s Dish Bar and Grill on Monday. Other Hot Links:
– 9 Players to Watch at the 2014 U.S. Women’s Open
– Trick Shot Tuesday: Masters of Misdirection
– Is FootGolf the Next Big Thing?
– Martin Kaymer Came Closer to Losing the Open Than You Think
– The Fringe: Kaymer Watches World Cup in NYC & Bubba Goes Fishin’