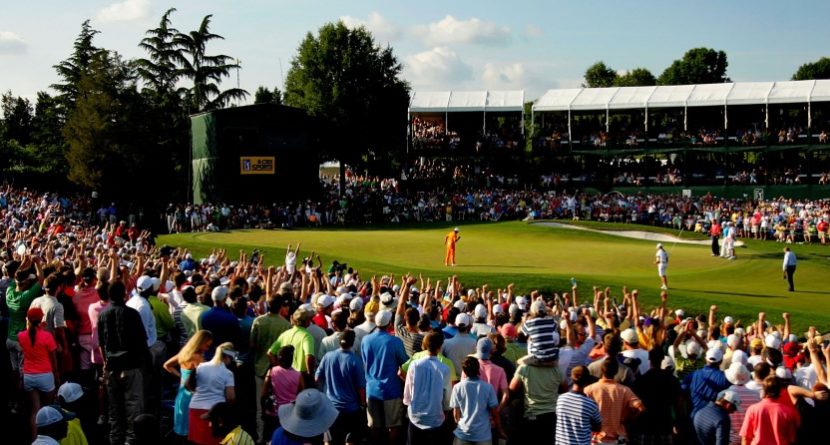 It’s not often that the PGA Tour pros get to scout a major championship course years before said major takes place, but they’ll be doing just that this week as the circuit swings through Charlotte for the Wells Fargo Championship. The event is hosted by the Quail Hollow Country Club, which has earned the honor of hosting the 2017 PGA Championship.

Of course, a lot can change between now and 2017, but it’s no secret that the better one knows a course, the better that golfer plays the course. These guys want to get as familiar with the “Green Mile” – the name given to Quail Hollow’s final three holes – as possible.

Here are five things you need to know about the Wells Fargo Championship and its surrounding area:

It’s not over until you’re through the Green Mile
Considered one of the toughest finishing stretches on the PGA Tour, the Green Mile sets Quail Hollow apart. A fairway bunker on the 508-yard, par-4 16th makes landing tee shots a chore, and the green is regarded as the course’s toughest. Then comes the signature hole at 17, a 221-yard par 3 with a peninsula green. Tee shots have to carry more than 195 yards over water. And at 18, a 493-yard par 4, drives must be accurate to avoid the bunker on the right and creek on the left. That gives players a chance to stick the uphill approach shot near the pin.

Whitewater rapids are minutes outside the city
You might not think of Charlotte as an adventure destination, but think again. An absolute must in this city is to visit the U.S. National Whitewater Center, which is primarily an Olympic training site for whitewater canoeists. But it also features rafting, kayaking, zip-lines, ropes courses, mountain biking, stand-up paddle boarding, hiking and much more for the everyday Joe.

Everything is secondary to NASCAR
The golf tournament may be a big deal this weekend, and the Bobcats may have made the NBA Playoffs (however briefly), but those are mere sideshows to Charlotte’s true love: NASCAR. So while in town, visit the NASCAR Hall of Fame. Watch an introductory film on the 64-foot-wide projection screen; meander down Glory Road, which displays 18 historic cars that tell the story of NASCAR; peak inside the Hall of Honor, where the HOF inductees are enshrined; experience Race Week, which gives you an interactive, behind-the-scenes look at how a NASCAR team prepares for race day; or just cruise along Heritage Speedway, viewing authentic artifacts and educational films of NASCAR’s history.

Don’t leave without trying the Bacon Cheeseburger on Steroids
The Bad Daddy’s Burger Bar franchise is beginning to expand, but it all began in Charlotte and claims to be “one bite away from becoming your favorite neighborhood spot” serving “the most amazing burger you’ve ever had.” So put all health concerns aside and order the Bacon Cheeseburger on Steroids: a basic burger seasoned with bacon salt and topped with three pieces of jalapeno bacon, three pieces of applewood smoked bacon, Monterey Jack cheese, housemade bacon mayo, shredded lettuce, tomatoes, onion, pickles, and served on a bun. Yum.