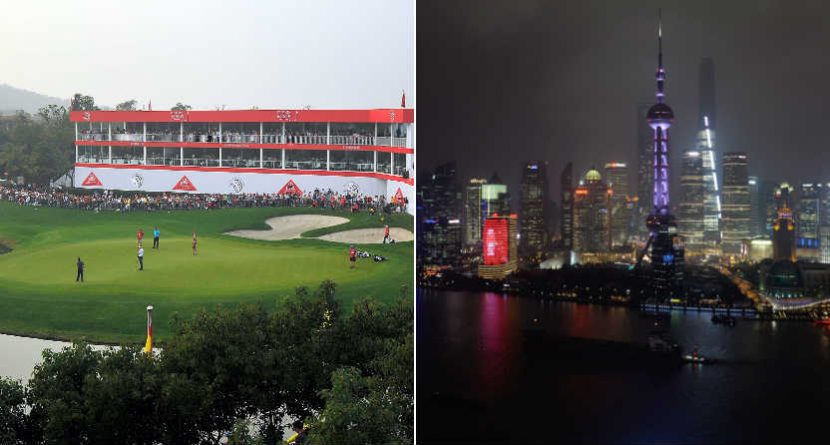 From Malaysia to China, the PGA Tour continues its international swing this week in Shanghai with the World Golf Championships-HSBC Champions at Sheshan International Golf Club. Being a WGC event, that means some serious money is on the line ($8.5 million purse, $1.53 to the winner). And being a HSBC event, that means some silly pictures are surfacing.

Here are five things you need to know about the tournament and the city in which it’s being played:

The stars are out in Shanghai
World No. 1 Rory McIlroy is not in the field (he’s taking some time off to prepare for an upcoming court case against his old management firm), neither is Tiger Woods (he’s still rehabbing his back), and neither is the HSBC Champions’ defending champ, Dustin Johnson (he’s taking some time off to deal with “personal challenges”). But let’s focus on the stars that will be there: Adam Scott (world No. 2), Justin Rose (6), Bubba Watson (7), Rickie Fowler (10) and Martin Kaymer (13), all of whom participated in some opening ceremonies. Also in the stellar field are No. 3 Sergio Garcia (fresh off yet another runner-up result), No. 5 Henrik Stenson (who just had a baby) and reigning FedExCup champ Billy Horschel (who became a father two months ago).

The views are amazing
Sheshan International and its 7,266-yard, par-72 West course sit about 45 minutes outside downtown Shanghai, which offers one of the most scenic skylines in the world. The crown jewel of that vista is the Oriental Pearl TV Tower, which stands 1,535 feet high and was the tallest structure in China from when it was completed in 1994 until 2007. It was topped by the Shanghai World Financial Center, but the Oriental Pearl is the more attractive building, with two large spheres wrapped around three columns, and a medium-sized sphere that sits the highest. A revolving restaurant resides just above the higher of the two large spheres, and a 20-room hotel sits in between. There are three main observatory levels, but also a museum, recreational area, space city, shops and restaurants.

The views are amazing with drinks too
If you liked the view from the Oriental Pearl, you’ll also enjoy the view of the Oriental Pearl from Bar Rogue, which sits across the Huangpu River. It’s among the most popular nightclubs in Shanghai, largely because of its outdoor patio. So after a long day touring the city, grab a cocktail and an outdoor table and view the city. Among Bar Rogue’s many awards are inclusion in Condé Nast Traveler‘s Top 35 Worldwide Night Spots, and Food & Wine Magazine‘s Best 50 Clubs & Bars. Try the local cuisine with no fear
Ordering a drink in China, especially at a modernized spot like Bar Rogue, isn’t as much of a problem for foreigners as ordering food can be. To take the uneasiness out of it, try a culinary tour. UnTour Shanghai will take you to three to six different places and feed you the equivalent of one large meal, and you don’t need to know a single character of Mandarin. The bilingual guides take good care of you. Choose from one of four tours: Night Markets, Street Eats Breakfast, Hands-On Dumpling Delights, or a private tour. Beverages are included too.

The Chinese are acrobatic entertainers
Before leaving town, you’ll also want to visit the Shanghai Circus World and catch the “ERA: Intersection of Time” show. It’s part acrobatic show (think Cirque du Soleil), part talent show, part concert and part movie. It’s been hailed as the “best show in China,” so it deserves a visit. Check it out:

Related Link: More Fun With Photos From The HSBC Champions