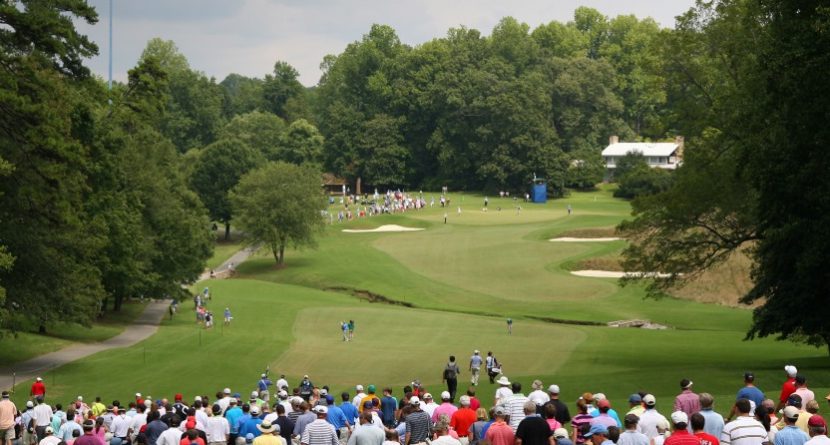 With all the majors off the schedule and most of the big guns taking time off prior to the start of the FedExCup playoffs next week, a bunch of guys are at Sedgefield Country Club in Greensboro, N.C., this week chomping at the bit to win the Wyndham Championship. Here are five things you need to know about the tournament and its surrounding area:

A lot on the line at Sedgefield
Being the last “regular season” event on the 2013-14 PGA Tour, a ton is at stake in the Wyndham Championship. To the victor goes 500 FedExCup points, which will be plenty to get a guy inside the top 125 that make up the field for the first playoff event, The Barclays. As of this moment, Paul Casey occupies the final spot with 421 points, so he needs a strong week, as do the five players right behind him: Sang-Moon Bae, Charlie Beljan, Greg Chalmers, David Lingmerth and J.J. Henry. (If you’re curious, here is the position-by-position points breakdown for PGA Tour events.) But it’s not just the playoffs – the top 125 retain their tour cards for next season, while the next 75 players in the standings have to go to the Web.com Tour Finals to try and earn a card. You need to unwind with some wine
After a long day of playing or watching golf, few places in Greensboro could be better than The Tasting Room, a 10-minute drive from Sedgefield. It’s a neighborhood wine bar and shop, giving you the option of more than 40 types of wine by the glass, or even more by the bottle. Live music takes place on Friday nights, and food trucks stop by on Saturday evenings. The Tasting Room offers salami and cheese with the wine, but allows outside food to be brought in – either from a truck or restaurant.

Minor league baseball games are a steal
Among the best bargains in sports are minor league baseball games, and Greensboro boasts a quality team. The Greensboro Grasshoppers are the Class A affiliate of the Miami Marlins, and currently sit 2.5 games out of first place in their division. They’re hosting the Kannapolis Intimidators from Thursday to Sunday – Thursday is $1 beer/soda night, Friday and Saturday feature post-game fireworks, and fans can play on the field before or after Sunday’s game. Premium tickets are all of $9, while general admission is $6. Make your way to NewBridge Bank Park.

Get your dinner and entertainment in the same place
Finding dinner and entertainment can be a challenge anytime you’re in a new town. Greensboro has a solution: the Barn Dinner Theatre. It claims to be America’s longest running dinner theatre, and calls it Dinnertainment. Start with a traditional buffet (salad bar, side dishes, rolls, biscuits, roast beef, honey-glazed ham, dessert bar) and then stay in your seats as the hydraulic stage drops from the ceiling. Comedies, dramas and musicals are performed right there, with the audience completely surrounding the stage.

Greensboro made civil rights history
In February 1960, Greensboro found itself at the center of the fight against segregation when four college men staged a sit-in at the Woolworth lunch counter. When they were not served a meal simply because they were black, the four men refused to leave. They peacefully left when the store closed, and returned the next day with more than 20 other students. The sit-in attracted much media attention, and six months later, Woolworth dropped its segregation policy. That store is now the International Civil Rights Center and Museum, which opened 50 years to the day after the initial sit-in. It is devoted to teaching people about the international struggle for civil and human rights.