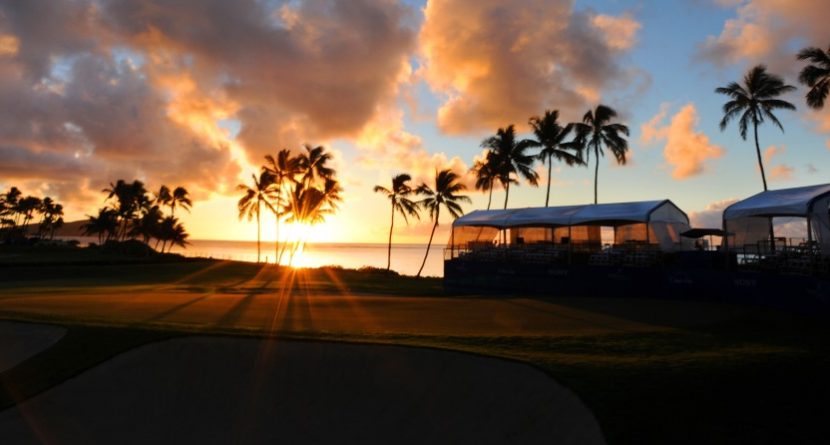 This is the year you’re going to take a trip to see a PGA Tour event. You’ve had all offseason (all three weeks of it) to prepare, and with the Frys.com Open teeing off Thursday, the 2014-15 season is officially underway.

This first event, being played at Silverado Country Club in Napa, Calif., would have been a great tournament to visit. But if you actually waited until the offseason, you probably didn’t have quite enough time to make arrangements. Luckily for you, there’s only 42 more non-major events to choose from.

Here are the 9 best places you could visit while taking in a PGA Tour event this season:

Riviera Maya, Mexico – OHL Classic at Mayakoba, Nov. 13-16
Stay at the top all-inclusive resort around, Iberostar Grand Hotel Paraiso, less than 15 minutes north of the El Camaleón golf course. About halfway in between the course and the hotel is Pavo Real by the Sea, the perfect spot for fine dining on the beach. And at numerous spots along the coast are cenotes (natural sinkholes and underwater caves) you can explore. Also, Playa Del Carmen is just down the road, and Cozumel is a short boat ride away. Honolulu, Hawaii – Sony Open, Jan. 15-18
Who doesn’t want to explore Hawaii? The tournament takes place at Waialae Country Club, which is a shame because it’s on the southernmost coast of Oahu and all the great surfing is on the north shore. But that’s only an hour away and definitely worth the drive if you’re a surfer. If you’re not, there’s always snorkeling, scuba diving, biking, parasailing, fishing, and more. If you prefer to stay dry, take a helicopter tour.

Pebble Beach, Calif. – AT&T Pebble Beach National Pro-Am, Feb. 12-15
If you’re a golf fan, Pebble Beach is a little slice of heaven. Three courses are in use for the pro-am, so that takes away some of your options if you want to golf yourself – but it’s a good thing there are plenty of options on the Monterey Peninsula. The Links at Spanish Bay are nice, as is the Del Monte Golf Course. Then there’s the Peter Hay nine-hole course, which is actually affordable. For some post-round wine, head into downtown Carmel and find Ocean Avenue – a slice of wine tasting heaven. Palm Beach Gardens, Fla. – Honda Classic, Feb. 26 – March 1
This tourney’s a good one for the fans because it attracts a lot of big names – largely because many pros live in the area. One such fellow is Tiger Woods, and after watching him play (hopefully), you should try out his new restaurant, which should be open by this time in nearby Jupiter. This is also spring training time, and the St. Louis Cardinals and Miami Marlins play at Roger Dean Stadium. For shopping and nightlife, West Palm Beach is waiting. San Francisco, Calif. – World Golf Championships-Cadillac Match Play, April 30 – May 3
A big-time tournament in a big-time city. The match play event will take place for the first time at Harding Park, which hosted the Presidents Cup in 2009 and will host the PGA Championship in 2020. Of course there’s Alcatraz and the Golden Gate Bridge to visit, and you could even get a workout in by traipsing through the Golden Gate National Recreation Area. But you’re not on vacation to exercise, so you must visit Ghirardelli Square. Everyone loves chocolate and you can’t go wrong here. If the calories leave you feeling guilty afterward, just walk/hike five blocks to the intersection of Lombard and Hyde Streets. The cars navigating through the eight hairpin turns on Lombard is free entertainment.

Fort Worth/Irving, Texas – Crowne Plaza Invitational and AT&T Byron Nelson Championship
May 21-24 and May 28-31
If you’ve got a couple weeks of vacation time stocked up, this is a great two-for-one deal to take advantage of. No two tournaments are closer together – the courses are 32 miles apart – and they’re played on back-to-back weeks. For convenience sake, you could stay right in between the courses in Arlington and take a tour of AT&T Stadium, where the Dallas Cowboys play. Or get your adrenaline pumping at Six Flags over Texas by riding the New Texas Giant. Or go play some Topgolf, which is based in Dallas and features three locations in the vicinity.

Oakville, Ontario – RBC Canadian Open, July 23-26
Our northern neighbor’s national open returns to Glen Abbey Golf Club, which has hosted more Canadian Opens than other course, making it the country’s most famous. It’s also the headquarters of Golf Canada, the nation’s governing body for the sport, and the site of the Canadian Golf Museum and Hall of Fame. Glen Abbey also sits 30 minutes outside of Canada’s largest metropolis, and if you’ve ever been to Toronto, you’ve seen the skinny tower that dominates the skyline. That’s the CN Tower, which rises nearly 1,800 feet, the tallest free-standing structure in the Western Hemisphere. Visit the observation platform, dine at the 360 Restaurant, or if you’re crazy, take a hands-free walk called the EdgeWalk.

Reno, Nev. – Barracuda Championship, Aug. 6-9
What used to be called the Reno-Tahoe Open is now the Barracuda Championship, but it remains at the Montreux Golf & Country Club just outside of Reno, the Biggest Little City in the World. Since you’re in Nevada, there’s obviously gambling to be had, and we suggest the Peppermill Resort Spa Casino, which offers couples, family and golf packages. Or take the quick jaunt south to Lake Tahoe for hiking, biking, horseback riding, fishing, swimming, kayaking, boating, paddle boarding, or more golf.

Atlanta, Ga. – Tour Championship, Sept. 17-20
Maybe you need time to save up vacation days and/or money – that’s completely understandable, so your last chance to attend a PGA Tour event is the Tour Championship at East Lake Golf Club in Atlanta. It’s a great city to conclude the season, especially if you enjoy Coca-Cola. That’s the tournament’s sponsor, so you’ll have plenty of chances to drink the stuff while at the course, but you could also take it to another level by visiting the World of Coca-Cola. Or there’s the home of 24-hour news at the CNN Center. Or all you sports fans can spend an afternoon at Centennial Olympic Park, where they held the 1996 Games. Just make sure you’re back at East Lake on Sunday. If you’re lucky enough to attend the PGA Tour’s season finale, you can’t miss the year’s crowning moment.