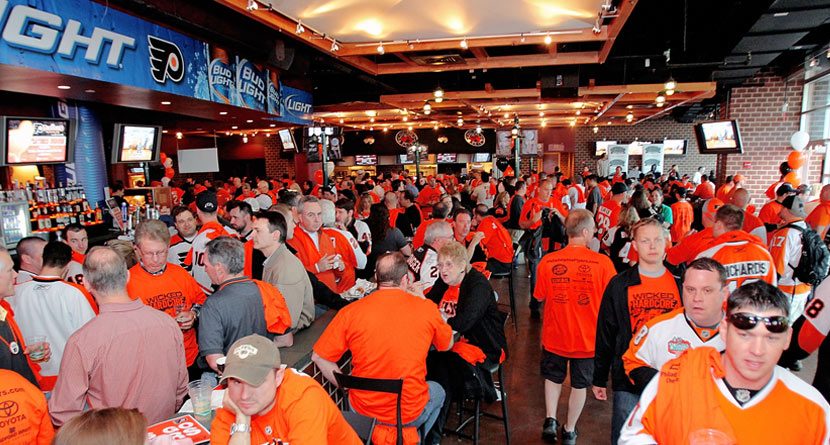 We all know that Philadelphia sports fans can be a bit … rowdy. But they’re passionate, we’ll give them that.

With four major professional sports teams calling Philly home, thousands of fans descend on the South Philadelphia Sports Complex whenever there’s a game. All those people have to go somewhere before and after the game, right?

This is where the sports bar scene comes in. And it’s not just near the stadiums. There are dozens and dozens of great places to kick back, enjoy a beer and watch a game (or the U.S. Open) throughout the City of Brotherly Love.

Here are three of those options. The top dog is Chickie & Pete’s, which is much more than a watering hole. In fact, it’s almost more well known for its crab fries and soft-shelled crabs than any of the 25-plus beers is has on tap at any given time.

Chickie & Pete’s has four Philly locations and two in New Jersey, but the one near the sports venues is the main hub. The 24,000-square foot paradise has 12-foot projection TVs and four bars. If you’re around for the U.S. Open but don’t have tickets, Chickie & Pete’s will no doubt feature the tournament on the larger-than-life screens. Another solid sports bar option, Field House has more than 35 high-definition TVs scattered around its 12,000 square feet of space. As for drinks, customers can chose from 40 local beers on tap that were made within 100 miles of the city.

Field House is located in the Philadelphia Convention Center and across from Reading Terminal Market, making it a perfect location. After you peruse the market in the afternoon and pick up some local selections, head over to the Field House to watch a game. If craft beer is your thing, City Tap House is the place where you need to be. Located in University City where Drexel University is located, this gem has 60 beers on tap ranging from witbiers, a form of wheat, to Belgian Dubbels, a type of Belgian that has a rich, malty flavor.

As for food, you can pair your brew with gourmet brick oven pizzas, a juicy burger or even a calzone with ham and gruyere. Doesn’t this all sound so … tasty?