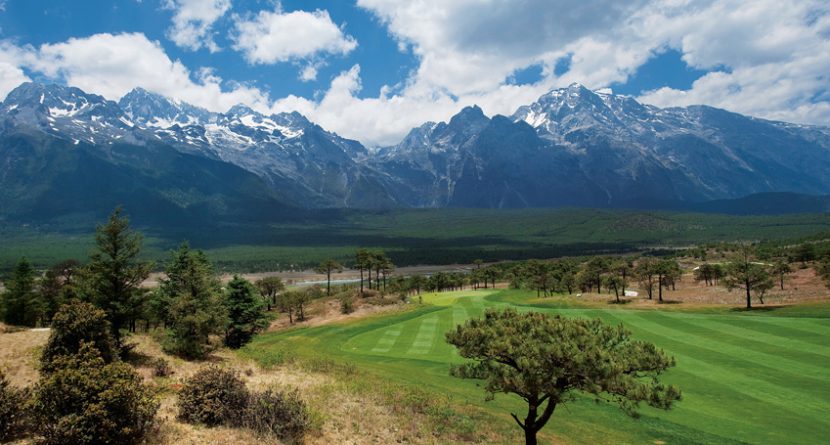 The common, everyday golf experience is not for you. What you crave in the fast-paced, over-connected world in which we live is the true spirit of adventure.

Here are 9 unforgettable places that will quicken your heartbeat and get your adrenaline pumping.

Beyond the novelty of a green built in the shape of the African continent, there is nothing immediately noteworthy about the par-3 13th hole on this Gary Player-designed course. Until you step foot on the green. That’s when you’ll see nearly 40 giant Nile crocodiles slithering in the water hazard beside the putting surface. Don’t become a Captain Hook—this is no place to fish around for a stray tee shot. One of these marauding reptiles could engulf you and your ball retriever in one gulp. Stretched across fingers of land nearly 500 feet above Hawke’s Bay on the North Island’s remote east coast, this vertigo-inducing links-in-the-sky belongs more to heaven than to the earth. Pressed to the edge of serrated cliffs and creased by ravines, this windswept headlands course, designed by Tom Doak, offers a visceral rush unlike any other. By the way, the hang time for a drive blasted from the edge of the cliffs into the sea far below exceeds 12 seconds.

Hewn into a netherworld of stark desert canyons on the outskirts of Vegas, its lush green fairways hemmed in by a desolate moonscape, this rugged layout, designed by a father-son team in 2000,  is one of America’s toughest tracks from the Challenger tees at 6,959 yards, par 72 (154 slope, 75.4 course rating). Accuracy is everything at Wolf Creek—there is no recovery from “the rough.” Because of its precipitous elevation changes, players must sign a waiver to drive a golf cart.

Attached to the Banff Springs Fairmont Hotel, a legendary “Fortress in the Rockies” ringed by 10,000-foot peaks, the resort’s golf course, a Stanley Thompson masterpiece routed across a mile-high river valley, may be the most spectacular course in the world.  Wildlife buffs should plan an autumn visit, when elk herds descend from the mountains to mate. Because the resort sits within a game reserve, the animals are accustomed to the presence of man. Just don’t get between a bull elk and its harem. A personal anecdote: shortly after I made the long forced carry over the jungle to the fiendishly contoured green on No. 2, a daunting par 3 (I four-putted), I sprayed my tee shot at the next hole into a grove of squat palm trees. As I made my way to the ball, which was clearly in plain view, my caddie clamped a “go no further” hand on my shoulder. “Drop another,” he said. “Why?,” I asked. “Cobra,” came the answer. Turns out king cobras make their home among the branches of the oil palms.

Adventurers with asbestos liners in their shoes can tee it up at this unique layout set within Hawaii Volcanoes National Park. Carved into the lower slopes of Mauna Loa mountain at 4,280 feet above sea level, the course is a mere 200 yards from the rim of Kilauea Crater, one of the world’s most active volcanoes. If you’re lucky, you may catch a glimpse of the legendary Pele, the Hawaiian goddess of fire and volcanoes, who occasionally plays—by herself—at twilight.

Far off the beaten path traveled by most golf pilgrims is Ballyliffin, Ireland’s most northerly club. Here awaits the Glashedy, named for the muffin-top of rock that rises from Pollan Bay. A fiendish test parted through corridors of towering dunes, its sinuous fairways staked out by deep, sod-walled bunkers, the Glashedy is a beast from the tips at 7,220 yards. From a few of the exposed, wind-blasted tees, you can almost see Santa and his workshop on the horizon. Now that the Arab Spring has sprung, point your camel in the direction of the Great Pyramids at Giza, where the fairways at the Mena House course pass near the greatest man-made edifices on Earth. Rely on your local caddie. Reading the greens here is like deciphering hieroglyphics on the side of one of the pyramids. Eighteen holes are played on nine fairways—there are two greens per hole. Celebrate your round on one of Egypt’s oldest courses in the historic Mena House, a magnificent hotel set in 40 acres of jasmine-scented gardens.

Located outside the ancient city of Lijiang in the Yunnan Province of southwest China near the Tibet border, Jade Dragon, routed at 10,000 feet in the foothills of the Himalayas, will literally take your breath away. For the record, this is the world’s highest-altitude 18-hole layout. The back tees stretch to a colossal 8,548 yards because the ball flies at least 20 percent longer here than at sea level. If you ever wanted to do your impersonation of Bill Murray in “Caddyshack”—“Big hitter, the Lama”—Jade Dragon is the place.

Other hot links on golf.swingbyswing.com:
– The Most Extreme Golf You’ll Ever Experience
– Extreme Weather 2013
– Extreme Golf Courses Around the World