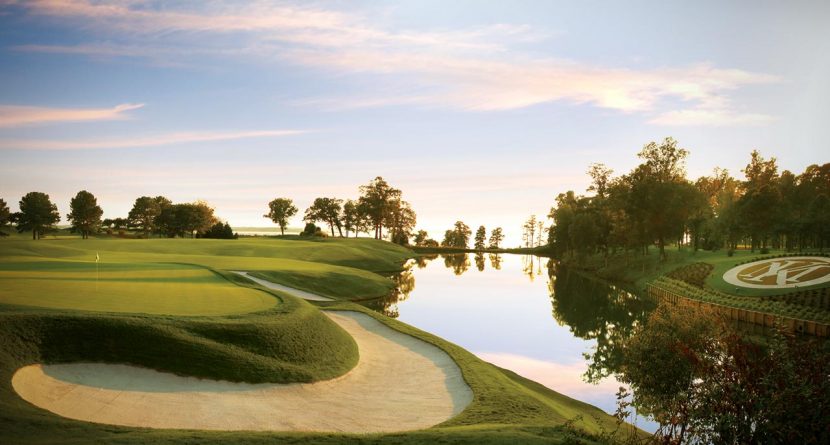 Patrick Henry didn’t have a damn clue how to cure my sudden case of the shanks, but he sure got me pumped up to support the colonies’ decision to defy King George III and sever their ties to Great Britain.

After my chance meeting with the 18th-century patriot — I was totally stunned upon later learning he was actually a convincing 21st-century actor — I quickly forgot my frequent hosel rockets the previous day at the nearby Golden Horseshoe Golf Club, although I was a bit miffed when Henry rebuffed my offer to trade him my irons for a musket.

You immediately embrace the spirit of this delightful, easily walkable Virginia town, which is a dead ringer for 18th-century Williamsburg on the eve of the American Revolution, complete with colonial-attired actors talking the talk. The interactive experience makes you just as likely to bump into an 18th-century statesman as a visiting Nebraska family.

There are numerous key sites throughout the 301-acre historic area, including the Governor’s Palace, the colony’s symbol of British authority, and the Capitol, the seat of Colonial power and site of Virginia’s vote for independence on May 15, 1776. You’ll also find exhibition sites, trade shops, homes, public buildings, shops and authentic dining taverns. Colonial Williamsburg also owns and operates 19 stores in the Williamsburg Marketplace  and four more in charming Merchants Square, which borders the historic area and features more than 40 stores and restaurants.

And oh, by the way, I discovered Colonial Williamsburg is not only one of the nation’s finest family friendly destinations, but it’s also very golfer friendly.

In fact, the Golden Horseshoe’s Gold Course is located a mere well-struck lob wedge behind the luxurious Williamsburg Inn, one of six Colonial Williamsburg hotel properties. The others are the Williamsburg Lodge, Providence Hall Guesthouses, Colonial Houses, the family friendly Williamsburg Woodlands and the economical Governor’s Inn.

The Robert Trent Jones Sr.-designed Gold—a 6,817-yard, par-71 (74.0/144 rating/slope) gem that opened in 1963 amid mature forests and ravines—has stood the test of time thanks to narrow, sloping landing areas and a slew of forced carries to small greens. Jones’ son Rees renovated the Gold in 1998 to make it more playable for medium- and high-handicappers, and the course is brimming with outstanding holes. Two par 3s jump to mind. The downhill 188-yard 12th requires an all-carry tee shot over water, and the 169-yard signature hole plays downhill to an island green surrounded by five bunkers.

Incidentally, Rees Jones got the nod for the Gold’s restoration because of the fabulous job he did designing Golden Horseshoe’s slightly tougher Green Course, a more-secluded beauty that opened in 1991. The shotmaker’s course features rolling fairways among old-growth woodlands, and water affects play on six holes. Like its topographically similar sister course a mile up the road, nearly every hole on the 7,120-yard, par-72 (74.81/142) Green—especially the par-3s—is superb. This gem is a Certified Audubon Cooperative Sanctuary, and there are adjacent Civil War redoubts of the Fort Magruder defenses used during the May 1862 Battle of Williamsburg.

Because I was losing my own Battle of Shanks, I reluctantly had to skip a round at the resort’s popular nine-hole Spotswood Course—named after Colonial Governor Alexander Spotswood — for an impromptu lesson with Director of Golf & Recreation Glen Byrnes, a miracle worker who set me straight, so to speak. The 1,865-yard, par-31 track was originally opened by the Williamsburg Inn in 1947 and was updated by Jones Sr. in 1963.

Another must-play nearby course is Kingsmill Resort & Spa’s River Course. Located just 10 minutes from Colonial Williamsburg, the River hosts the LPGA’s annual Kingsmill Championship and was the longtime home of the PGA Tour’s Anheuser-Busch Classic. This 6,831-yard, par-71 beauty reopened in Spring 2005 after a renovation by Pete Dye, whose original design opened in 1975. Dye softened the layout, although the River still features plenty of elevation changes, bunkers and water, including the beautiful James River on the final three holes.

In fact, alongside the 17th tee is the site of Burwell’s Landing, where Kingsmill Plantation’s Col. Lewis Burwell operated a ship and ferry landing that was an 18th-century port for Williamsburg. The remnants of waterfront brickwork is his old warehouse.

There are other fine Williamsburg-area public golf choices, with the three best being The Tradition at Royal New Kent, designed by the late Mike Strantz, The Club at Viniterra (Rees Jones) and Arthur Hills-designed Colonial Heritage Club. Time permitting, any or all are absolutely worth adding to your itinerary, but be prepared for a bloodbath at Royal New Kent unless you’re an accurate player or a willing masochist.

While you’re in the area be sure to drive the Rockefeller-designed, 23-mile-long Colonial Parkway—which actually runs underneath Colonial Williamsburg—and visit the other two nearby parts of America’s most historic triangle, Jamestown and Yorktown.

You know, it doesn’t matter that Patrick Henry didn’t know the difference between a 460cc adjustable driver and a hybrid club. What does matter is the Colonial Williamsburg area offers something for every member of the family. Bring your thirst for history — and your golf clubs — and enjoy.