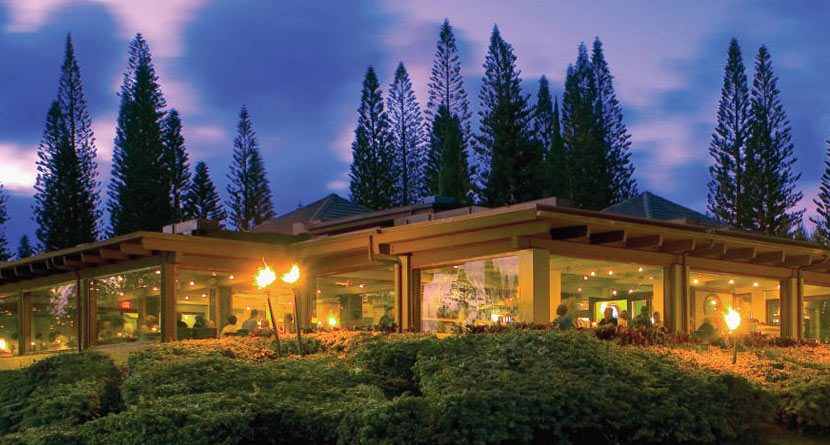 Professional golfers are known as creatures of habit on the course (a-hem, Kevin Na and his intriguing pre-shot routine). Well, unsurprisingly, that also translates to life off the links.

At nearly every PGA Tour stop, year-after-year, most players return to their usual hangouts and restaurants, which ranges from local hotspots to the predictable chains, like Carraba’s, Bonefish, Outback, P.F. Chang’s, Yard House, Chipotle, and if they feel like splurging, Ruth’s Chris. However, I’d say the majority of stops, by tradition, have “the ‘It’ place,” where you’re sure to run into a familiar face or ten.

Here’s a comprehensive list of nine of the must-visits — a mix that covers the standard stomping grounds, along with the newer joints that are foodie’s faves. Photo: Ceiling at the Pineapple Grill

This local eatery ranks in my top three favorite stomping grounds — it’s probably a tie between here and Sansei, just down the street at Kapalua — and it’s definitely beloved by the players, all of whom you’ll inevitably run into throughout the week. Stalker alert! (Aside: You’ll find Stephen Ames ringing in the new year with dinner and fine wine at Pineapple Grill…every year.)

The atmosphere is casual Maui-style and the food is first-rate, with an incredible menu regardless if you prefer seafood or steak. I love the Macadamia Nut Crusted Hawaiian Mahi Mahi and the Filet Mignon, and the Lamp Chops come highly recommended. It’s a great place to hang out and have a drink at the bar and watch football, but then the main dining room is more intimate. Still, flip-flops and shorts are acceptable attire.

The lobby bar at the Ritz Carlton is almost an inevitable stop for a night-cap on the way to your room since you have to walk by it and it has a knack for luring you in. “Just one beer” can easily turn into five or ten, but the best part is that your bed is only a stumble away. This, uhhh, establishment doesn’t serve the most quality food in the world, but if you’re not picky, the burgers, sandwiches and potato skins are eatable (depending on your alcohol intake, you may not always be able to stomach it). The beer selection is better and the people-watching is unmatched, particularly after the sixth round of Q-school finals.

Oh, wait, I almost forgot about The Nest — which is definitely better for people-watching, not to mention there’s dancing and a decent menu! When you first walk in, you’re not sure whether you just traveled back in time 30 years or accidentally walked into a convalescent home. Kidding! Well, kind of. In the words of a local, it’s a “super trendy” (see ‘hipster’) bar and restaurant just off the beaten path in Little Italy. It’s a popular new restaurant in downtown San Diego with modern decor, including iPads to make on-site reservations. Vodka lovers be warned: it’s not served here, among other select liquors — the owner believes vodka is a waste of a drink — but there’s an elaborate list of house specials, including some Prohibition-style whiskey drinks with goofy, historical names.

The bartenders are decked in prohibition-era garb, complete with suspenders. The bar is always PACKED at dinner time during weekends, especially Friday. The menu is crazy with large portions — best appetizer is the mini-corn dogs with three different mustards/sauces and an all-time favorite entree is the Mac and Cheese. They also have bacon-covered cracker jacks, which are basically the food form of cocaine. For cougar-hunting and silicon at maximum capacity, try Ocean’s. Otherwise, the Bird’s Nest, the after-golf massive party tent that features alcohol, some eats and live music (this year’s lineup included Goo Goo Dolls, Will.i.am of The Black Eyed Peas, Slightly Stoopid, among others) is a must-visit simply for the experience. Booze is the most recommended item on the menu. Lots of it.

If you score VIP tickets, the food is actually pretty good (if I recall correctly). There is a special Thunderbird VIP section to the left of the stage that is standing-room only but at times you may wonder how it’s considered “VIP” when you’re squished in between strangers.

The best seat in the house? Wander to the back left-side of the stage and you’ll find The Coop, which has comfy couches, an open bar and yummy buffet. You can dance like a rockstar backstage or side-stage or just enjoy the music and company. One catch: It’s the special Thunderbird, the charity group (I prefer to call them a ‘secret society” or “private club of wealthy movers and shakers in Phoenix”) that runs the tournament, spot, so it’s accessible only if you’re wearing a navy velour blazer or you’re with someone who is. You can’t go wrong with the Pebble Beach Lodge, but if you’re not into the crowded, loud yet upscale pub scene for dinner, then venture outside 17-mile drive. For a more casual atmosphere, Little Napoli is a festive yet cozy Italian joint, which has a good bar for after-dinner beers and drinks.

Just down the block, Lucas is an outstanding fine dining Italian restaurant with a nice selection of wines. As “boring” as Spaghetti Bolognese sounds, this was better than most (the fact that I remember it being good says a lot). For a trendier, new spot, 1833 is a cool place in downtown Monterey. It’s got a lot of atmosphere, lively bar scene and eclectic menu.

Just thinking about the Mac and Cheese is causing me to drool. I’m not kidding. There’s an interesting, kinda offbeat bar menu, which includes a drink that’s made partly with a vaporizer. The server swore it was used solely for that purpose…at least during regular open hours. Acme House and Drago’s are two good seafood joints that are known for char-grilled oysters and well-frequented by players, caddies, reps, etc. Those are two of the more “touristy” spots, but you can’t really go wrong. Honestly, I can write a gazillion words about the food in NOLA. Everything you’ve heard is true. It’s amazing.

K-Paul’s is a local favorite and one of the most delicious, scrumptious meals of my life. Let’s see, the bread basket will fill you up and again, best ever. For appetizers, I recommend the Fried Green Tomatoes, Fried Oysters and whatever the server recommends. I went with the “Surf-n-Turf” for the main course, a combo of Blackened Drum (restaurant known for it’s style of cooking fish “blackened”) and Blackened Filet Mignon. Reservations are booked months in advance, especially with the Zurich Classic coinciding with Jazz Fest, but if you show up on the later side (9 or so) and don’t mind waiting 20-30 minutes (it’s well worth it), there’s a good chance you’ll get a table.

Mr. B’s is another famous restaurant known for its Creole cuisine. Ernie Els, who lost in a playoff to Jason Dufner, dined there, and according to a reliable source, enjoyed the atmosphere and food. The Cowfish wins the honors for most-unique-restaurant-of-the-year (so far). The name says it all, without saying it all — if that makes any sense. It serves burgers made with sushi ingredients, and sushi made with burger ingredients. Plus, they have traditional burgers and traditional sushi. There’s a sushi bar, complete with hip decor and bright and bold colors.

The menu is undoubtedly one of the largest and most diverse menus I’ve encountered. The Ahi Tuna Nachos is a very good way to start of the meal. The Seared Ahi Tuna Burger (not sure of the official name) substitutes egg roll paper for traditional buns and with sushi ingredients stack in between. The “Burgushi,” sushi with burger ingredients, is also a must-try. Oh, it gets better — they make a) homemade milkshakes and b) homemade milkshakes with liquor, aka “Spiked” Milkshakes.

A friend described the Coffee Bean Milkshake with Baileys as “hands down, the best dessert I’ve had all year.” This is the only one of two Cowfish in the country (a Raleigh location opened up over the summer) — reasonably priced and a must-go, just about 10 minutes from Quail Hollow Club. Cafe Andiamo is a quality traditional Italian restaurant with an expansive bar and wide-ranging menu, with plenty of good options on both. The atmosphere is quaint and intimate, so you won’t be overwhelmed like at a chain. There’s limited seating, which creates a traditional restaurant-like feeling.

They serve very good flatbread pizza. A favorite is the Pizza Rustica, which has grilled chicken and peppers. The Seared Poppyseed Ahi Tuna appetizer is amazing — ahi tuna combined with soy and avocado. It’s on PGA TOUR Blvd., so it’s just down the street from TPC Sawgrass.

Ruth’s Chris is just outside the gates of PGA TOUR HQ and you can always expect to see a player or two there or five there. Conveniently-located next door Pussers (yes, that’s seriously the name — it’s a type of rum — but when a few friends told me to meet them there, I stared at them blankly and asked them to repeat themselves at least twice, maybe thrice) is a nice spot to grab an after-dinner drink on the upstairs outdoor patio. It had a run-of-the-mill chain-like, cheesy-theme feeling to the main dining area, but the Jerk Chicken Quesadilla was quite scrumptious (not sure if that’s because my expectations were low and/or I hadn’t eaten all day). Awesome bar, great beer selection, fantastic BBQ and it’s within one mile of Colonial. It’s probably more of a “trendy” spot than a traditional BBQ-like railhead, but the food is awesome. A favorite entree is the Chopped Beef Sandwich and you can’t go wrong with a side of chips. Recommended app is Chile Spice Almonds. There’s also a bar menu if you’re looking for snacks. Favorite beer — don’t let the name fool you — is an Ugly Pug. They serve monthly local beers. During the tournament, the specials were from Dallas and called “Lawnmower” and “Weed-Wacker.” I’m told both were “awesome.”