Genoa Bar And Saloon: A Slice Of History 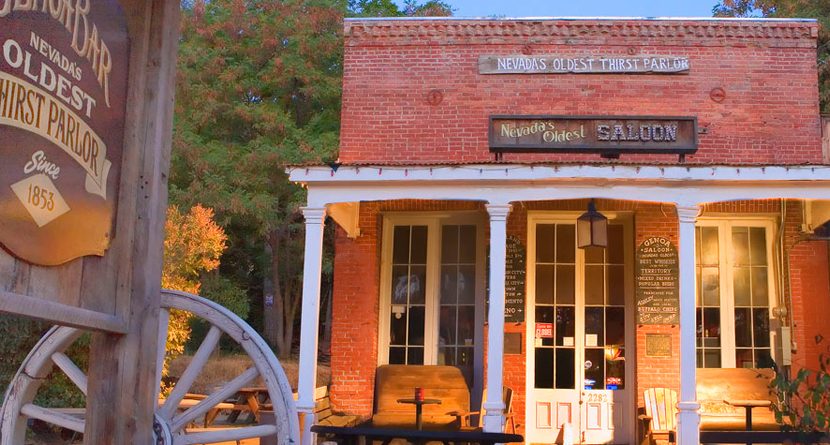 Ever been to a bar where the locals bring their own firewood to keep it warm in the winter? How about a place that was built in 1853 and still stands today?

Or, have you ever drank a beer under the same lights that once lit folks heading west in search of gold?

If your answer to any of these questions is no, then it’s time you visited the Genoa Bar and Saloon.

The establishment is located in Genoa, Nevada, a small town just east of Lake Tahoe. In 1850, Genoa became the first settlement in what was once called the Nevada Territory, and the Genoa Bar and Saloon, which opened three years later, was its first watering hole (it’s also the oldest bar in Nevada).

As you can imagine, there’s a lot of history there.

Most of the building is still original. The interior lights, which were converted from oil to electric at the start of the 20th century, remain in place. Tomato juice stains on the ceiling (the owners swear it’s not blood) have been there for decades, and the Diamond Dust Mirror hanging above the bar came from Scotland in the 1840s.

One of its famous drinks is a Bloody Mary, which has 14 ingredients. And speaking of famous, loads of celebrities have paid the Genoa Bar a visit over the years — Johnny Cash, Willie Nelson, John Denver, Teddy Roosevelt, Raquel Welch (the bra she left is on display), and Clark Gable are some of the former patrons.

If you want to avoid the craziness of Las Vegas but want to play some slots, head to Reno. And when you blow through your gambling money on the first night of your weeklong trip, hop on I-580 South — Genoa is about 40 miles down the road. Thanks to Nevada’s speed limit of 75 miles per hour, it’s not a very long drive.

You can also squeeze in a few rounds of golf at Genoa Lakes Golf Club, which can cost you as little as $39 per man. Nestled on the eastern edge of the Sierra Nevada Mountains, the scenery alone is worth the price.

If you’re into the cowboys and cowgirls scene (who isn’t?), the town of Genoa will play host to the 4th Annual Genoa Cowboy Festival, May 3-5. If you go, make sure you bring your cowboy boots and spurs (if you have them) because folks wearing “regular” clothes will stand out like a snowman on a scorecard of birdies and pars.

The way we see it, any town that shares the name with a type of salami (and a town in Italy) is good in our book. So pretend you’re part of the California Gold Rush and head west. But before you reach the Golden State, make a pit stop in this town of 250 and have a drink at a piece of American history.