Here’s To You, Hartford! 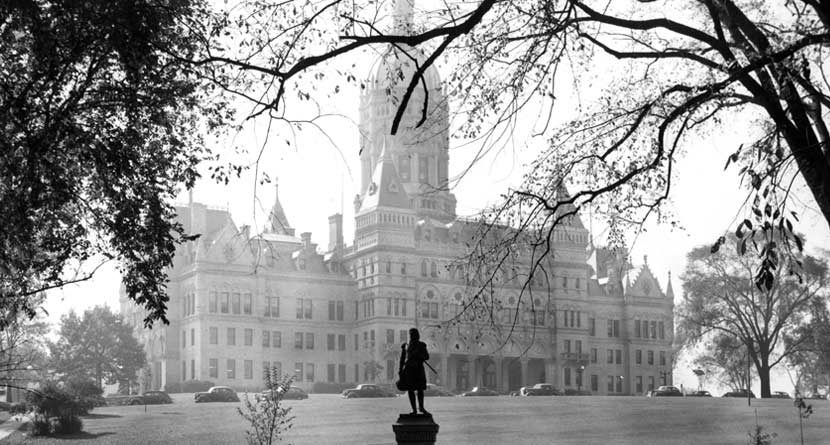 In the spirit of the PGA’s Travelers Championship coming to our backyard, the capital city of Connecticut deserves to boast about all of their primitive attractions. Here at Back9Network we decided to compile a list of the Top 9 Reasons why you should join in the celebration of Hartford… besides the Travelers Championship, of course:

1)  Extra, extra! Read all about it! Back in the day, old school Hartford became an important center for cultural revolutions and vital communications. For example, our very own Hartford Courant, founded in 1764, is the country’s oldest continuously published newspaper.

2)  Bestselling author of the Hunger Games series, Suzanne Collins, was born here in Hartford. In addition, Will Friedle, Eric Matthews (Cory Matthew’s brother) from “Boy Meets World” was born and raised in our capital city. All in favor of a dynamic collaboration between the two, say I… I’m thinking Mr. Feeny Games.

3)  Trinity College, offering one of the best liberal arts programs in the nation, was the first college in America to have open admissions, regardless to religious beliefs. Trinity College coexists right in the heart of our capital city…get it? …Coexist? Excellent, moving on.

4)  Hartford’s own Samuel Colt changed the face of weaponry when he invented the revolving cylinder. He later patented his trademark cylinder in 1936. Clint Eastwood used a Colt 1851 Navy with a conversion cartridge, complete with the iconic silver snake on the handle, in one of the most famous films of all time, The Good, the Bad, and the Ugly.

5)  Interested in the arts? Hartford is the home of this nation’s oldest public art museum: The Wadsworth Athenaeum, founded in 1844. Supported by prominent benefactors like J.P. Morgan, Hartford’s Wadsworth grew to become one of the Top 10 art museums in the country. Take that Paris.

6)  Not into the arts? Okay, how about good ol’ All-American baseball. Detroit Tigers’ World Series Champion star player, Dick McAuliffe was born and raised here in Hartford. Known for his unusual batting stance, McAuliffe went on to become a decorated three-time MLB All-Star.  I wonder if he would be interested in competing in the Mr. Feeny Games…

7)  The Phoenix Mutual Insurance building, located in Downtown Hartford, is full of novelties. In the insurance capital of the world, this building’s distinctive style stands out unlike the rest. Not only is it the first two-sided building in the world, but, more importantly, the tenth floor operates as the global headquarters of the first golfing lifestyle network,  Back9Network.

8)  If one were to mention cigars, and their origins, the names that would likely come to mind would be: Cuba, the Dominican Republic, Mexico, and Honduras. However, the same people would be surprised to find out that Connecticut also deserves recognition for cigar production. In none other than the fields of the Connecticut River Valley, outer cigar wrappers are grown. These shade-grown Connecticut wrapper leafs are surprisingly one of the world’s most desirable and expensive agricultural goods. If you’re ever traveling along I-91 from Hartford into Springfield during the summer, chances are you’ll witness the enormous fields full of white gauze netting.

9)  The first author to submit a typewritten document to a publisher was a Hartford resident from 1874: Samuel Langhorne Clemens. Today we better know this pioneer by the name of “Mark Twain.” Yeah, I would have changed my name too. Regardless, I bet you didn’t know that local admirers saved his home in Hartford in 1927 from demolition. The community eventually transformed Twain’s home into a museum that still stands in his honor today.

Related Link: What It Takes To Win – Travelers Championship