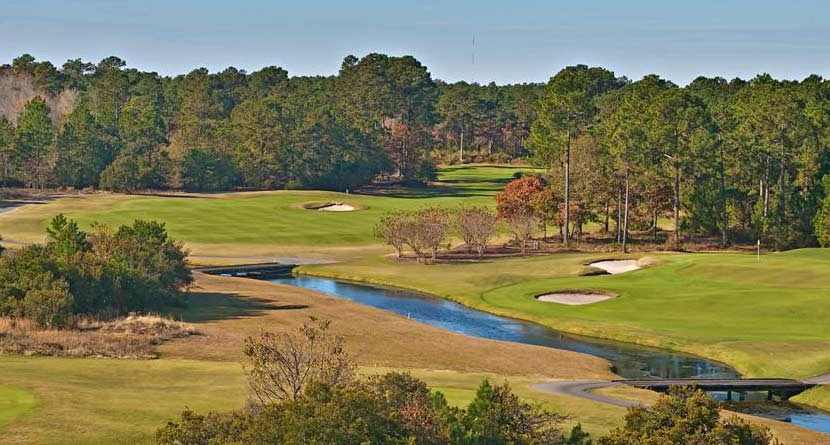 Every golfer dreams of getting to play Pebble Beach or heading to Oregon to play Bandon Dunes for a week. These resorts and courses are considered once-in-a-lifetime destinations, and for most of us, the reason for that is the price. Each year, thousands of golf enthusiasts like me look to get around Mother Nature’s wrath by heading south to warm weather and green grass … even if it’s spray painted.

This year, my group and I found the “deal to end all deals” for a winter golf getaway. The Legends Golf & Resort in Myrtle Beach, S.C., offers everything you could want out of a buddies trip — including the Grand Strand’s “Course of the Year” — for just $433 a head. Our trip was booked through Travel Connections in West Springfield, Mass., but the deal is widely available. It includes five rounds of golf, 10 meals, 10 drinks, and absolutely cannot be beat. On top of that, the accommodations are spectacular. Each deal includes a two-bedroom, two-bathroom condo with a full kitchen and living room. We were lucky enough to snag a condo with a porch, as not all rooms include these. Each bedroom includes two twin-size beds, which means no impromptu-spooning with a buddy or having to decide who gets the couch. When you’re not sleeping in your luxury condo, you’re probably enjoying your golf at one of the Legends’ five courses. The Heathland, Moorland and Parkland courses are all on-site at the Legends Resort. The other two, Heritage Club and Oyster Bay, do require an off-site excursion, but it is worth it.

On our trip, we visited the Heritage Club, just up the road in Pawley’s Island. The Heritage Club was the group favorite. From a challenge, aesthetic and customer service standpoint, everyone was eager to help and extremely polite. The course provided some of the most fun and scenic golf I’ve played in a while. From the treacherous island green on 18 to the gators that guarded the shores, there was always something to look at during the round. The toughest test we faced was on-site at the resort on the Moorland course. Named by the Myrtle Beach Area Golf Course Owners Association as the Course of the Year for 2014, it was no surprise that we all shot numbers we’d like to forget. The course, however, was unforgettable. The P.B. Dye design challenges even the best players with water, pot and waste bunkers and elevation changes — which are hard to do in Myrtle Beach. After playing it, it’s easy to understand why it’s been ranked among Golf Digest’s 50 most challenging courses.

The one thing I would warn about the golf here is that the pace of play is pretty slow. Not that we cared — being on vacation and never too far from an adult beverage or cigar — but we only had one round clock in under five hours. We even had a round that was close to six hours long. Speaking with starters and other staff, they said this was, unfortunately, common for the resort. That being said, it was the only (and in our case, just slightly) bothersome characteristic of the resort. As part of out deal, we had 10 meals and 10 drinks. Breakfast is served buffet-style every morning at Highlander’s Double Eagle Tavern, and lunch vouchers can be redeemed either at the Tavern or the snack bar at the turn. The drink vouchers can be used for fountain sodas or draft beers anytime of the day. Since they had Yuengling on tap, we obviously went with the draft beers. The food was good, not great, but it was filling and certainly hit the spot during our marathon rounds.

The other on-site dining option is the Alisa Pub. The Pub is the perfect 19th hole, offering everything from pub favorites like fish and chips and chicken tenders, to scrumptious hand-formed burgers and fire-grilled pizza. Inside, you can watch anything you want on its massive TVs, play darts, or just sit at the bar and sample the collection of Pappy Van Winkle bourbon and start exaggerating about your feats on the course. While only the braver were using them this time of year, there is also an outdoor pool and spa behind the Pub. One of the best parts of the Legends is its location. We went during the “off season,” meaning many of the places in the city were closed or closing around 6 p.m. However, that doesn’t include some of the establishments that, uh, “gentlemen” might want to frequent while they’re on their buddies trip. Whether you’re looking for that kind of off-course entertainment or some of a more wholesome variety, you can find it close to the resort. Just off Highway 501, the Legends is no more than 15 minutes from the Broadway at the Beach, Tanger Outlets, the beach or any other attraction.

At the end of the day, the experience was excellent and I’d give the resort an A- grade. For the price, it’s tough to beat. While we’ll all surely (one day) make the golfer’s sacred pilgrimage to Pebble, Bandon or Pinehurst, the Legends Resort offers the perfect location and price for your annual buddies trip in the meantime.