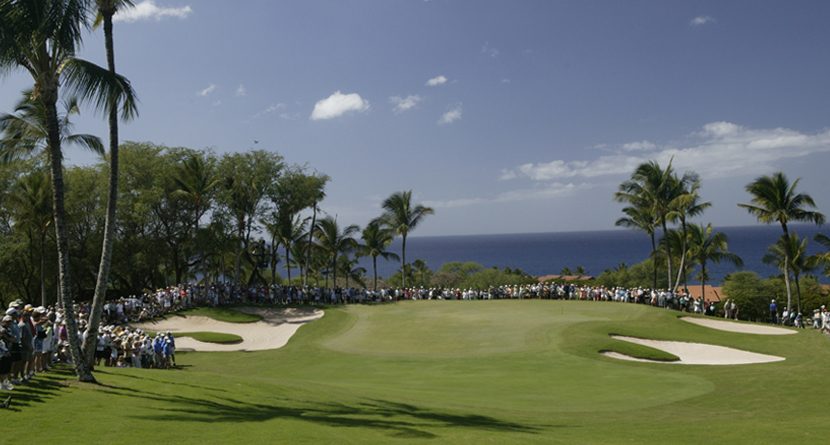 Following a sub-par — not to be confused with under-par — round at Wailea Golf Club’s Emerald Course, I couldn’t help but smile. Hell, I was in sun-drenched Maui, it was 84 degrees, my Connecticut driveway was covered in snow and, while I couldn’t locate most putting surfaces, I had discovered earth’s most beautiful spot.

Maui — Hawaii’s second-largest island (729 square miles) — is a must-visit destination, whether you’re a golfer or not. My wife, Deb, can’t differentiate between a putter and a driver; however, she now knows the difference between a lomi lomi massage and a Swedish massage. Besides the rub of the green and shoulders, other popular Maui activities include world-class shopping, dining, snorkeling, whale-watching (between November and May) and sightseeing. Or simply relax poolside or on the beach while sipping Mai Tais or Lava Flows, and wait for the indescribable — and incomparable — Maui sunsets.

The eight courses at the island’s four major oceanfront resorts — Wailea, Makena, Kaanapali and Kapalua — are Maui golf’s heart and soul. Our odyssey began at Wailea’s Four Seasons Resort Maui, whose service — and ocean views — were second to none. The staff addressed us by name and pool attendants regularly spritzed us with cool Evian water and provided ice-cold, mango-scented towels. We loved our sunset dinner at the open-air, beachfront Ferraro’s Bar e Ristorante and our massages eliminated our jet lag. Meanwhile, the 6,825-yard Emerald is a photogenic beauty thanks to colorful tropical vegetation, but it can also be a beast. The rear-tee view of the 380-yard opening hole reveals a spectacular 180-degree panorama of the Pacific Ocean, Kahoolawe (an island once used for U.S. Navy target-bombing) and Molokini, a tiny offshore reef popular with snorkelers. The 10th and 17th holes share a lakeside double green.

Nearby Old Blue, a 6,765 yarder, is the resort’s oldest course. This straightforward track also enjoys fabulous views and is Wailea’s best choice for mid- to high- handicappers. Wailea’s golf clubhouses feature superb dining experiences. We enjoyed an excellent lunch at the aptly named Gannon’s — A Pacific View Restaurant, at the Gold/Emerald facility, and a delicious dinner at Mulligan’s on The Blue, the Blue clubhouse’s authentic Irish pub, which also offers nightly entertainment.

Low-key Makena — Maui’s southernmost golf resort — is only two miles away. Bring your A-game to Makena’s Jones Jr.-designed course, which was extensively restored in 2011. The course winds around 10,023-foot-tall Mt. Haleakala’s foothills and heads down to the sea while navigating native trees, ancient rock walls and streams. The scenery and views are impressive, as is the downhill, double-dogleg, 620-yard 14th, the state’s second-longest hole.

Since Wailea and Makena are located at Mt. Haleakala’s base, a stay at either resort is an ideal launching pad for the two-hour, hairpin journey to the volcano’s summit or the spectacular, winding Hana Highway drive. On your return from Haleakala’s peak, visit the tiny village of Ulupalakua’s Tedeschi Vineyards (www.mauiwine.com), in upcountry Maui. The island’s only winery features homegrown wines, including pineapple wine, and the Ulupalakua Ranch Store, across the street, offers deli sandwiches and grilled items.

The south-end resorts are also closer to Paia, which is 10 minutes south of the Kahului airport on the Hana Highway. The eclectic town is jammin’ with funky, outstanding boutiques, shops and restaurants, and is a great people-watching spot.

About 45 minutes north of Makena along the western shore is Kaanapali, Maui’s first planned resort. En route stop in Lahaina, a cool, old whaling village that we visited several times to shop and eat.

Our room at Kaanapali’s Hyatt Regency Maui, five minutes north of Lahaina, overlooked the massive pool (two huge pools divided by a waterfall and an underground grotto pool bar), the Pacific, and the nearby islands of Molokai and Lanai. We enjoyed massages at Spa Moana and the hotel’s nightly Drums of the Pacific Luau.

Meanwhile, The Ritz-Carlton, Kapalua welcomes visitors, including us, to Maui’s north shore. The Five-Diamond property — with 463 recently redesigned rooms and suites — sits on a 23,000-acre pineapple plantation. The hotel is backed by the majestic West Maui Mountain range and overlooks the Pacific, Molokai and, in season, whales migrating through the Molokai Channel.

On the final night of our trip, as Deb and I watched the flaming sun’s shadow lower across a sacred burial site located between The Ritz and the beachnfront, it occurred to us that being able to witness the spectacular Maui sunsets was the one thing we could share with the ancient Hawaiians. For that reason, not to mention a million others, we’ll be back.

• Maui’s biggest tourist attraction — literally — is Mt. Haleakala, the world’s largest dormant volcano. Located in Haleakala National Park, the volcano looms over the entire island. The long and winding road to the summit takes you through a plethora of micro-climates to the summit crater, which, at 3,000 feet deep and 21 miles in circumference, is large enough to hold Manhattan.

• Another popular scenic drive is the Hana Highway, 50 miles of often extremely narrow road that winds along the southeastern shore between Kahului and Hana. You’ll pass breathtaking waterfalls, scenic lookouts and wayside parks along the 52-mile, three-hour (depending how many times you stop to ogle the scenery) drive from Kahuli Airport to Hana. Fifteen minutes past Hana are the 95-foot Wailua Falls and Oheo Pools in Haleakala National Park.

• Lahaina’s shops and restaurants join Front Street’s weathered wooden buildings that reflect this former lusty port for New England whaling fleets. Lahaina was Hawaii’s royal capital in the early 1800s, but today numerous shops and restaurants are Lahaina’s most-popular commercial trade. The sprawling Banyan tree in the town center, the world’s largest tree of its kind, needs to be seen to be believed.