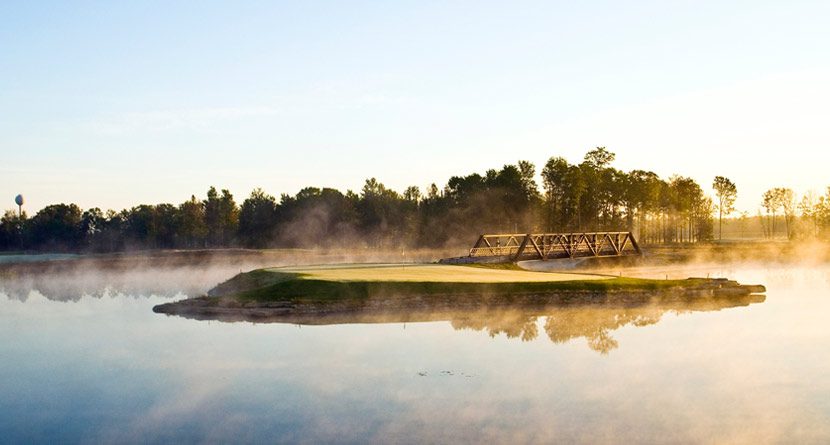 Michigan’s Upper Peninsula is no place for pine-allergy sufferers.

If not for mostly vacant ribbons of roads, the U.P., as it’s called by the native “Yoopers,” is apparently completely blanketed with thick pine forests. However, the U.P. more than makes up for its lack of exciting nightlife (or daylife, for that matter) with a world-class trio of golf courses.

Nationally recognized Sweetgrass Golf Club at the Island Resort & Casino, TimberStone at Pine Mountain and Marquette Golf Club’s Greywalls Course — all located in the west-central U.P. — have created an increasingly popular golf destination, and our eight-golfer group feels like we struck gold in this area of Michigan where copper once ruled.

Greywalls is ninth overall and third among golf-prosperus Michigan’s public courses in Golf Digest’s 2013-2014 “Best in State” ranking and all three are among GOLF Magazine’s 2012 top-20 Michigan public layouts — Greywalls (No. 5), Sweetgrass (No. 14) and TimberStone (No. 19).

We found all three to be beautiful, outstanding designs, each providing unique experiences. If that’s not enough to lure you to the northern Michigan wilderness, maybe the popular Perfect 4-Some stay-and-play package will.

Count us among the growing hordes to utilize the value-laden package, which, starting at just $245 this spring, includes rounds at Sweetgrass, Greywalls and TimberStone, and a two-night stay at the Island Resort & Casino, located an hour south of Marquette near Escanaba. The casino and the courses correctly determined strength in numbers is even more effective when the destination’s off-course diversions, aside from the lively casino,  are minimal. After checking into the Island Resort & Casino, we tackled Sweetgrass, a natural beauty built atop 740 acres of rolling landscape. The 7,275-yard, par-72 course — designed by Michigander Paul Albanese — is owned and operated by the Hannahville Band of the Potawatomi Nation and will host its third Symetra Tour event June 28-30. Sweetgrass, which opened in July 2008, was named one of 2009’s best new courses by Golf Digest and Golfweek, then debuted in GOLF’s 2010 top-20 state ranking.

Sweetgrass’ 12th, which maxes out at 244 yards, is best handled by avoiding a pond to the left of the narrow, double-tiered, 58-yard-long green. A crushed, all-carry drive over water from the tips is needed at the 427-yard 17th, which incorporates a recovered U.S. Department of Transportation footbridge. The uphill ninth and 18th holes share a double green that lurks just beyond cascading waterfalls and a pond. The Island Resort & Casino — which looms behind the double green and has been making ongoing property improvements the past two years — includes the Palm Tower’s 162 spacious rooms and luxury suites and the Sun Tower’s 113 rooms and suites, which are undergoing a 2013 multi-million dollar renovation. The casino features more than 1,200 slot machines and 24/7 Vegas-style gaming, including craps, blackjack, roulette and poker. The Island Showroom hosts top musical acts. Dining options include the new 5 Bridges Restaurant and Pub (a 19th hole), Firekeeper’s Restaurant, Coral Reef Grille and new Island Sports Bar. There’s also a lounge, nightclub, swimming pool, and new conference center (golf banquets and corporate events are on the rise) and VIP Golf Room.

TimberStone, in Iron Mountain, is just under an hour’s drive from Sweetgrass. We weren’t exactly wowed by the sights en route — endless pine forests, and several microscopic villages with gas stations and little else. We kissed the boredom goodbye upon pulling into the club’s parking lot. The Jerry Matthews-designed TimberStone is a unique beast that winds around Pine Mountain. The 6,937-yard, par-72 layout, with a 75.0/148 rating/slope from the tips, is part of the Pine Mountain Resort, created in 1939 by Pabst Blue Ribbon founder Fred Pabst.

To that end, Timberstone, which exemplifies the U.P.’s rugged beauty, deserves its own blue ribbon. Huge native boulders and rock outcroppings are utilized brilliantly in Matthews’ demanding design, which opened in May 1996. In addition, trundling putting surfaces, lush rough and strategically placed bunkers play prominent roles.

Our gang’s highlight was the ace made on the signature 215-yard 17th — which plummets 110 feet tee to green — by TimberStone’s assistant professional playing in our preceding group. Once the exuberant foursome exited the green, I rattled my tee shot into the right-hand “forest of no return.” Alas, I not only incredibly found my ball an inch from a tree trunk atop a bed of pine needles, but I managed a miraculous up-and-down par thanks to a flop over a greenside bunker and five-foot putt. Don’t tell me there wasn’t some weird karma swirling around that green. Greywalls — about a 90-minute drive through, yup, wilderness and a few more tiny nondescript towns — is a 6,828-yard, par-71 roller-coaster ride. Mike DeVries carved this distinct creation through more than 230 forested, vertiginous acres of spectacular landscape, coupling rock outcroppings with vistas of Lake Superior, the largest of the Great Lakes.

DeVries’ putting surfaces — not to mention fairways — are some of the most wildly undulating landforms this side of the Himalayas, so check your ego at the first tee, buckle up and enjoy the breathtaking view of the lake some 400 feet below. The 73.0/144 rating/slope from the tips should be much higher considering the guarantee of multiple crazy fairway caroms and 100-foot putts on the massive mounded greens.

The first six holes include two dramatic tests — a 60-foot granite wall juts out of the green at the 312-yard fifth and the distinct 188-yard sixth features a ravine with three teeing areas set more than 40 feet below the rear tee and the putting surface. The 12th through 15th holes are arguably Greywalls’ best stretch — measuring 491 (par 4), 559, 449 and 240 yards, respectively. Greywalls was a blast, and must be played at least once, even by the faint of heart.

After being thoroughly humiliated by wild-and-wooly Greywalls, we dragged what little of our self-esteem remained over to Greywalls’ 18-hole sister course, The Heritage. You should do the same. This wonderful 6,260-yard, par-71 layout offers a more traditional experience than outrageously fantastic Greywalls — hell, it’s like comparing Frank Sinatra to Lady Gaga. William Langford and Theodore Moreau designed The Heritage’s original nine holes in 1926, with David Gill adding the rest in 1969.

The therapeutic emergency round — not to mention a number of post-round beers — soothed our souls. While there might not be tons of non-golf activities, we unanimously determined the region’s tremendous golf offerings make it OK to head north to the U.P.