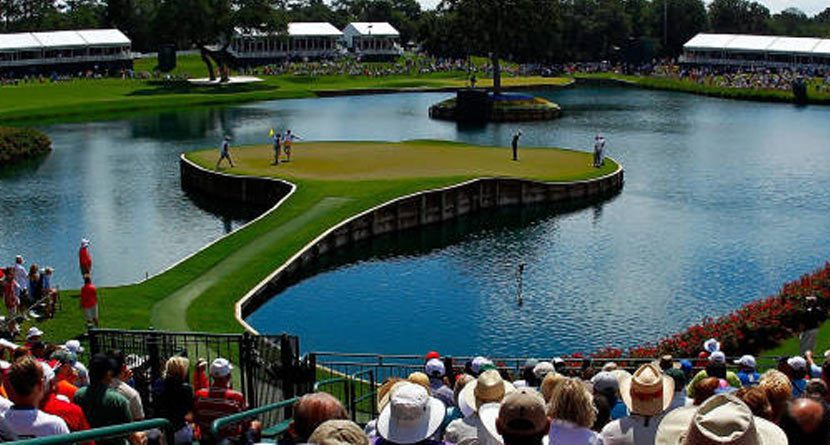 With the return of the Players Championship comes the return of the treacherous 17th hole at TPC Sawgrass. Perhaps the most famous hole in all of golf, the island green at 17 presents a unique challenge not seen anywhere else in tournament golf. While it isn’t the original, it’s probably the best and is definitely the most famous of the island greens

No more than a pitching wedge or 9-iron for most players, the 17th at Sawgrass really gets tough during the Players Championship, when the pressure and purse cause uncharacteristically bad shots at inopportune times. Just ask Sergio Garcia about that.

In the spirit of the Players Championship, here are our picks for the best island greens in golf:

Jack Nicklaus laid out 19 holes at this luxury resort on the west coast of Mexico, just north of Puerto Vallarta. This alternate 3rd hole, best known as the “Tail of the Whale,” boasts a green that sits on a natural island in the middle of the Pacific Ocean.

During low tide, golfers can trudge through the sandy path to get to the green, but at high tide, it’s only accessible via amphibious golf cart. Both means to reach the breathtaking green sound like a treat to me. Anyone up for a trip to Mexico?

The world’s only floating island green is surrounded by lovely red geraniums, a pair of bunkers and some confiers, not to mention one of the country’s most stunning lakes. The 15,000-square-foot putting surface beckons golfers for a challenge, floating silently 150 yards off the lakeshore.

Unlike other island greens, there are no man-made strips of land that provide a bridge over the water. Instead, it’s only reachable by a six-passenger boat called the “Putter”. If you reach dry land and two-putt for par, you earn an award certificate on the ride back. Sure, it sounds a little gimmicky, but that doesn’t make it any less intriguing.

Pete Dye was initially skeptical about replicating his famous island green at Sawgrass, but his colleagues convinced him to do it. With the changes to Q-school system, the course hosted its last old-format PGA Tour Qualifying Tournament in December 2011, which forces half the field to play the treacherous 17th hole, dubbed “Alcatraz.” Though the green is significantly larger than Dye’s original, it’s also 30 yards longer, and for PGA Tour hopefuls, it becomes doubly intimidating on a breezy day in the desert, especially during that sixth and final round with Tour cards on the line.

Now this is pretty neat, especially since it’s in my home state. The 17th green has an island green the shape of an apple, guarded by a back-left bunker that resembles a leaf. Then there’s a stem in a form of a 50-foot walking bridge connecting the green to dry land. Looks like it’s worth taking a bite from that apple.

Don’t let the yardage fool you, even if you’re not playing the back tees, there’s no room for error around the edges of the putting surface. Unless you land it on the green, your ball will find the surrounding marsh.

Good news is at low tide, there’s a chance to recover it. There’s usually a constant breeze moving through this all-walking links style golf course. This is a hole where you take par and run for the next tee.

Built in 1917 by esteemed architect A.W. Tillinghast, the 15th, commonly known as the “Moat Hole,” is largely believed to have the oldest island green. Sometimes this hole is compared to the 17th at TPC Sawgrass, but the Moat Hole isn’t as visually intimidating as the former. However, it’s much harder to find dry land from the championship tees.

This island green is surrounded by a 15-foot wide moat with 10-foot high banks. There are three bridges to access the green. Worth noting: This public track has a very reasonable walking rate of $16 on weekdays between 3-5pm.  Sounds like you get your money’s worth.

Herbert Strong was the original architect of this classic course in 1928, which was scheduled to host the Ryder Cup in 1939. Unfortunatley, however, the event was canceled that year due to World War II.

The par-3 9th is one of the first island greens that inspired the creation of the now-famous par-3 17th at nearby Sawgrass. The generous bailout area makes the original less menacing, but it’s an underrated gem.

The famed par-3 17th at TPC Sawgrass for The Players Championship is controversial among PGA Tour players, including Tiger Woods, who doesn’t think it should be one of the finishing holes because there’s too much left for chance, like a gust of wind suddenly blowing your ball off-line. Meanwhile, Jason Dufner, winner of the 2013 PGA Championship, said he doesn’t mind it. Then again, in four starts at this event, he’s never hit it in the water. In fact, he’s never even seen anyone in his group dunk their ball in the drink.

For TV and entertainment purposes, it’s better than most and always provides a dramatic and exciting finish, often playing a key role in deciding the winner (or loser) of golf’s “5th major” on Sundays.